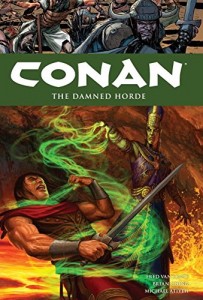 There are few books that I return to on a regular basis, but chief among them are Robert Howard’s Conan stories. When I first read them, they fired my imagination and inspired me in a way that few writers and books had, possessing as they do a raw energy, magic and power that elude most genre authors. It’s these qualities, the ones that Howard’s work was steeped in, that I look for in every adaptation that crosses my path, and while I haven’t read all of the numerous imaginings and re-imaginings of the Barbarian’s life, I’ve read more than enough to know that not all of them are successful and even fewer capture the elusive elements I so readily seek. I think, however, that in Fred Van Lente, I’ve discovered a kindred spirit, as he understands Conan in a way that very few writers do, and Brian Ching’s incredibly detailed and life like, yet at the same time beautifully desolate and brutal, art is the perfect companion piece to his prose as it brings Howard’s ancient world and his thieving, piratical, noble savage to triumphant life.

Leading his team of mercenaries, and former Royal Guards, ‘Amra’s Bastards’ in search of an ancient horde of treasure and the sister of  one of their own, Conan and his men find themselves subsumed into the ranks of Prince Almuric’s army.  While the force is led by a preening fool, not all who serve in it suffer from the same affliction, and even though it suits Conan’s purposes to ride and fight with Almuric, the presence of old “enemies” ensures that he not only sleeps with one eye open, but that the true nature of his band’s mission isn’t revealed. When success at last seems within his grasp, he’s confronted by another old foe who seeks the same thing as Conan, and in an adventure soaked in sorcery, blood, gore, sword-play, treachery, scheming, ancient monsters and death, the barbarian and his comrades are pushed far beyond the limitations of mortal men as each is granted the “reward” they so desperately yearn for. The Damned Horde is Conan as Howard would have written him, a bastard, a champion, a warrior, a thief and a hero, cursed to walk his own path no matter the cost to himself or others, immersed in a tale that’s woven with precision and a dedication to the mythology and history of the character. And it is absolutely fantastic… Tim Mass Movement