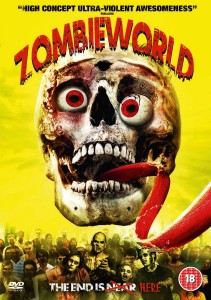 Zombieworld (Image Entertainment)
I remember the old days, when zombie flicks were a rare and much vaunted visual treat and something to look forward to with slavering joy, delight and glee, all of which would inevitably be rewarded by shuffling, flesh and brain eating corpses being defeated by the only slightly less dim-witted humans, who having been feasted on by the walking cadavers, would find a way to turn the tables and defeat their rotting protagonists. Yes, folks, back in the good old days when Hammer, Romero, Fulci, O’Bannon and their ilk were the kings of cadaverous horror and all was right with the world. These days however, with the over saturation of the cinematic sub-genre and the sudden mainstream interest in, and appeal of, all things returned from the grave, everything’s gone to hell and I’ve kind of tuned out of the whole zombie thing. Or at least I had until ‘Zombieworld’ finally appeared on DVD.

Presented in the same fashion as one of the old Amicus portmanteau films, that is, as a series of short films connected by a wrap-around story, ‘Zombieworld’ could easily have fallen flat on its ambitious face, and undoubtedly would have done so had it not been for Bill Oberst Jnr., Adrian Cardona, Rafa Degra, Phil Haine and the respective casts of their contributions. Oberst Jnr plays Marvin Gloat, the clichéd, slightly hackneyed and world weary news reader Marvin Gloatt who’s up to the minute (while decaying thanks to being bitten) reports provide the linking narrative for the film, while Cardona and Degra present ‘Fist of Jesus’, in which Jesus and Judas fight off a multitude of cowboy, peasant and roman undead with a food stuff of the five thousand, and the absolutely bonkers but hugely enjoyable what-I-did-when-I-was-on-my-summer-vacation-after-being-released-from-the-metal-hospital-and-the-underwater-zombies-attacked ‘Brutal Relax’. And then there’s Phil Haine’s ‘I Am Lonely’, the ‘Spaced’ meets ‘Men Behaving Badly’ tale of the oncoming apocalypse that admittedly has a bit ‘Sean of the Dead’ running through it’s cold, decaying veins, but also walks (or should that be shuffles) its own, unique path. Even though the rest of the film is decidedly hit and miss and slightly less than memorable, its these insane, delightful and original chapters and Oberst Jnr’s start turn that transform ‘Zombieworld’ from an also ran into a must see for aficionados of classic zombie films and fans of good old fashioned blood, guts, gore and more horror cinema. Splatter-tastic! Tim Mass Movement