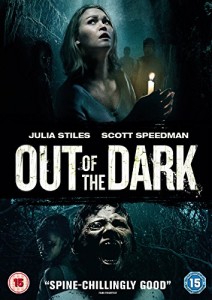 Out of the Dark (Entertainment One)
Everyone has a secret cinematic fear; films that scare them so badly they make you cry like a little girl who’s just watched a fluffy little kitten get squashed underneath the wheel s of a ten ton truck. Me, I’m kind of a wuss when it comes to supernatural horror, or for that matter, anything involving ghosts and vengeful spirits that return to wreak havoc on those who wronged them and the land of the living in general. I’m terrified of spectres, spirits, spooks, poltergeists and things from beyond the veil, whether they manifest physically or just move things around and throw crockery and mirrors at walls and people, it doesn’t matter what they do, the fact that they do it at all makes my blood freeze and my heart beat ten times (and not in a good way) faster. When the paranormal appears on screen, I instantly become ‘that guy’. You know, the one who either hides behind the sofa in classic Doctor Who style, pretends he has to do something that just can’t wait in another room or covers his eyes and shakes uncontrollably while begging for the horror to end. So when it came time to watch ‘Out of the Dark’, my wife and twelve year old daughter assured me that everything would be alright, and sat down to watch it with me, knowing that it was highly likely that at some point during the film, I would almost certainly freak out. My wife and daughter know I’m a wuss, and now, so do you.

‘Out of the Dark’ is the story of Sarah, Paul and their daughter Hannah who move to the small Columbian town of Santa Clara so that Sarah can take over running the family business (a paper mill) from her father, Jordan. Santa Clara however, harbours a centuries’ old secret, and still lives in the grip of its tragic and horrific past. So it isn’t long before that past starts to effect the family, but particularly and tragically Hannah who apparently falls victim to its spell; and as her parents and grandfather frantically try to save her, the real secret that the town – and Jordan- has been harbouring slowly begins to reveal itself. Following in the best tradition of J-Horror like ‘Ringu’, traditional haunted house features like ‘The Amityville Horror’ and the more elaborate, slow reveals of classics like ‘Poltergeist’, ‘Out of the Dark’ features stellar performances from its cast (especially Julia Stiles and Scott Speedman as Sarah and Paul) and its central ideas and plot are both involving and intriguing as the audience shares the families sense of creeping realisation that something is dreadfully wrong in their new home. However, all of that initial promise starts to deflate about three quarters of the way through the film as it suddenly takes a left turn and opts for a far more sedate and almost pedestrian finale that bypasses a lot of the haunting threads set up by the plot. Don’t get me wrong, it’s still a moderately gripping, and satisfying ending, but after being pushed in one direction by the story, it feels almost as if the writer and director went for the safe option rather than exploring some of the more grizzly aspects of the tale. That said though, I didn’t freak out and I didn’t even have to jump behind any furniture. But I did have to hide behind a cushion a couple of times. Hey, what can I say? I’m a wuss… Tim Mass Movement