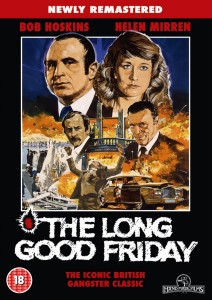 The Long Good Friday (Arrow Films)
Decades before ‘Lock Stock And Two Smoking Barrels’ and ‘Snatch’, there was the eminently quotable  ‘The Long Good Friday’, a British gangster film with both heart and bollocks. Central to its enduring power is a charismatic break-out turn from Bob Hoskins, who literally munches up the scenery as Harold, an ambitious and forward-thinking gangster about to clinch the biggest deal of his life – until some shady dealings of one of his former employees drags him into a turf war with the IRA. Used to being in complete control of his destiny and surroundings, Harold now finds himself against an opponent he cannot buy or reason with, and his calm demeanour slowly unravels as the film plays out, gradually revealing the violent thug he has kept carefully hidden behind his crafty businessman persona for so long. Hoskins is ably supported by a cool, calculating Helen Mirren, a young Pierce Brosnan, in his very first role as a fresh-faced assassin, and a veritable who’s-who of familiar faces from British film and TV.
The whole thing throbs with both a compelling gritty energy and a dark gallows humour, and, with its late Seventies setting and occasionally horrible electronic score, is an endearing time capsule as far as both London and British crime cinema goes. It has been lovingly restored for posterity with both picture and audio digitally scrubbed to ensure this is the best version of the film you can possibly lay your hands on, and – as we’ve come to expect from those generous people at Arrow – is complete with a whole host of extras. There’s the usual making-of documentaries, and interviews with key cast and crew etc., and the second disc even features ‘Apaches’, a depressingly bleak but interesting curio: a health and safety film John MacKenzie made the year before TLGF, warning children of the hazards to be found on a working British farm. One by one the children vanish, crushed under the wheels of tractors and drowned in slurry pits, the tragedy hammered home with footage of funerals and school desks being cleared out… upbeat viewing it definitely isn’t, but even though it was only a public information film, there are still hints of the dramatic cinematography that would come to the fore the following year. A great release then, for anyone with more than a passing interest in the British gangster genre. Ian Glasper