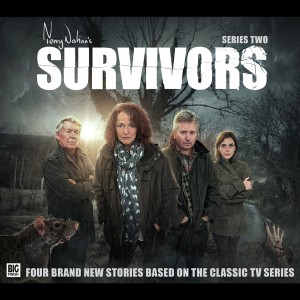 Survivors: Series 2 – Starring Lucy Fleming, Carolyn Seymour, Ian McCulloch, John Banks, Louise Jameson, Tim Treloar, Bernard Holley, Chris Finney, Rachel Atkins, Fiona Sheehan, Jane Slavin, Tim Bentinck & Alison Mc Kenzie & Written by Ken Bentley, Matt Fitton & Louise Jameson – 4xCD / Download (Big Finish)
The end of the world is never going to be easy, but I suspect that when it does happen, it most probably won’t – in the words of TS Elliot – end with a bang, but in a whimper. It won’t be nuclear warfare, alien invasion or some form of catastrophic global extinction level event that makes the sky burn, the seas boil and disintegrates all forms of life down to the smallest, simplest bacteria that closes the book on our species; it’ll be something quiet, something small and previously unseen that turns the lights out on civilisation. There’ll be an irreversible break in the food chain, the climate will change beyond all recognition or, as in ‘Survivors’, a virus will mutate and wipe out ninety nine percent of humanity almost overnight. That’s the most terrifying scenario, the one that we can’t do anything about, the ticking time bomb that once denoted, catapults mankind, or at least those who the virus doesn’t kill, back to the Stone Age. And that’s the world that ‘Survivors’ is set in, a world in which humanity is forced to try and rebuild, a world in which living becomes everything as people chose to hold on to their morality or to abandon it completely and revert to savagery and a kill or be killed mentality in order to see another day dawn. It’s a bleak, dark and at times brutal, horrifying and depressing world, and this second series of ‘Survivors’ captures the tone, mood, atmosphere and reality of that grim, but strangely promising, post-apocalyptic existence perfectly.

This second series is much more direct than the first and isn’t afraid to confront the darker side of human nature how that manifests itself in people and their behaviour toward one another. Opening chapter ‘Dark Water’ is a slow burner, and re-introduces the main cast, bringing them together via a callous, cowardly act of abandonment while drip feeding clues to later parts of the series and revealing the lengths that at least one of the main cast is prepared to go to in order to get what they want when pushed. ‘Mother Courage’ follows Abby, Jackie and Jenny on their quest to try and find Abby’s son, Peter, and leads them to a women’s camp, where the determination to build a future without men takes a radical, and dangerous twist, while Daniel, Russell and Greg, seeking aid in dealing with a wildlife problem set out to seek help from a noted survival expert in ‘The Hunted’, only to find that the tables turned on them, as they fall victim to a cunning, vicious and merciless enemy. Finally, ‘Savages’ twist the dial up to eleven, shocking the audience even more, as it explores the depths that some of the survivors have plummeted to, and revel in, as Greg fights for his life against a foe who can’t be reasoned, or argued with in a world that really has gone to hell.

Refusing to pull any punches, or spare it’s audiences sensibilities, ‘Survivors: Series 2’ is a compulsive, engaging and enthralling drama, yet at the same time is also horrifying, desolate and more than a little unsettling, as the truth often is. The writing is exemplary and isn’t afraid to question and incorporate controversial storylines such as rape, murder, torture and other hideous facets of humanity, and the cast are on equal form (especially Bernard Holley as the haunting George Ridley and John Banks as Daniel Connor who is desperately searching for a purpose in the “new” world) as they bring those nightmare visions to frightening life. It isn’t an easy listen, but it is a rewarding and enjoyable one, just make sure you’re prepared for it before you embark on the journey. Welcome to the future… Tim Mass Movement