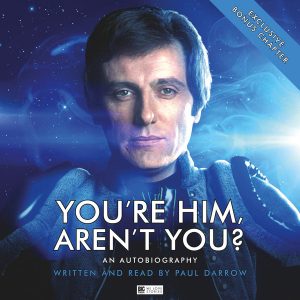 It’s a familiar story: actor leaves a landmark role and for many years does their damndest to persuade the world that they are someone other than the character they’ve left behind.  They continually stress their range and versatility and urge casting directors to remember the complexity of their previous roles.   Then sooner or later they realise that the iconic role they left behind was, after all, the one thing that defined them and put food on the table, and that realistically will be the only thing that they’ll be remembered for.  It’s often at this point such actors shrug and re-join the conference circuit with a degree of grace and gratitude.

Such is the story of Paul Darrow. Even if you’ve never seen him, you’ve probably heard his voice (trying to sell you something on the television, perhaps). And what a voice it is. Sinister, sibilant and silky, like a cross between Shere Khan and a bar of Green and Black’s, not only is it totally logical that Darrow reads this audio version of his autobiography, but quite frankly, I’d pay money to hear him reading the telephone directory aloud.

The autobiography is written in anecdotes and reads like an extended dinner conversation.  Some of the yarns are rather funny, with Darrow’s sardonic tone adding to the humour, and the repeated name-dropping of actors who are more famous than he is belongs comfortably in the realm of self-parody. But importantly, Darrow clearly likes to like people, and both friends and contacts are invoked sympathetically.  He seems to have been on good terms with his Blake’s Seven cast-mates, particularly and appropriately with Michael Keating (Vila) whose relationship with Avon was the most enduring in the series.  Darrow’s admiration for Terry Nation is also extraordinary.  In Nation’s company he says, he always felt himself to be in the company of authentic greatness.

There’s also a kind of touching innocence and a redemptive quality to Darrow’s writing style. Like many actors, he feels frustrated by the limited extent of his celebrity.  But the fact that the cosmos has decreed that he be known forever as ‘that Avon out of Blake’s Seven’ is something that he now realises demands gratitude rather than recognition.

When I was a kid, I used to watch Blake’s Seven every Saturday night with my mum. We both ADORED Avon and his blend of gay-bar camp and edgy manliness. Listening to this reminds me of how much that television show meant to me, and helped shape the sort of books, films and television programmes I always turn to now. So he may feel that he never quite got the recognition he deserves, but I hope he realises the massive impact both he and Blake’s Seven had on a generation of kids.

Oh- I would have liked it if the book was called ‘Ding Dong, Avon’s Calling’, but that’s my only gripe. Bex Ferriday