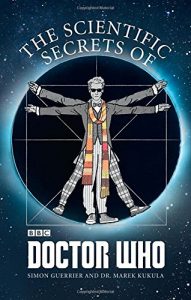 Do you want to learn more about the science behind your favourite Timelord-based television show? Do you want something that, though a work of non-fiction, is never dry or didactic, is never highfaluting nor patronising, and contextualises the concepts it introduces by linking them to specific Doctor Who stories throughout? Then this, my friend is the book for you.

Not your sort of thing? How about fifteen beautifully written short stories featuring your favourite Timelord-based television show and with a list of authors that reads like a Who’s Who of Who?  How about Justin Richards, Jacqueline Rayner, and Andrew Cartmel (for a start) penning these stories, each one encapsulating perfectly the themes that make for a traditional Doctor Who story? Then this, my friend is the book for you…

The Scientific Secrets of Doctor Who contains fifteen chapters, each introduced with a short story then, viewed through the lens of televised adventures, followed with the history, current research and theoretical concepts behind topics such as space travel, the laws of time, evolution and artificial intelligence. The facts read as easily as the fiction, and the book flows stylistically from genre to genre with ease.   And the fact that it does flow so beautifully is important. As someone who works in the field of education, I really do believe that our brains are more receptive to learning when we are happy and when we are entertained. This is where we soak up knowledge without even realising it – learning by stealth, if you like. And it’s by stealth that I learned a lot of stuff through reading this book. For example:

Our sun is currently middle-aged, and will, eventually, cool, redden and become a Red Giant. As a result, the Earth’s demise will likely play out in exactly the same way it did in the 2005 story The End of the World.

Potatoes are easy to clone, and this couldbe the inspiration for Sontarans, who are also clones. And armour clad, warlike potatoes.

The Room with all the Doorsby James Goss is an incredible piece of fiction that will haunt me forever.

So as it turns out, I’m writing this review while eating my hat (which, even with tomato ketchup to wet it up, still tastes of straw and stale hairspray). I assumed that this book would be, at best, confusing and, at worst, a bloated mess of fact and fiction: one of those books that tries to fit so much in that it ends up being an unreadable mess. I am not too proud to admit that I was totally, irrevocably and stupidly wrong. Buy this book if only to see just how wrong I was.  Bex Ferriday