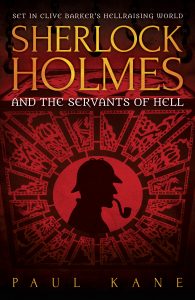 Why is it that Holmes and Hellraiser work so well together? I was asked when I was approached about doing this blog. What is it that makes them such a perfect match?

For me, that’s always been a given. I’ve been a fan of both of them since the 1980s and, in a weird sort of way, they’ve always been linked in my mind. Let me try and explain… I came to both the Sherlock Holmes stories and Clive’s fiction at the same time. I’d already begun my lifelong obsession with horror, after I read James Herbert’s The Rats at a very young age, and someone had shown me my first video nasty (I think it was The Exorcist, or maybe The Evil Dead). So, when I spotted Clive’s Books of Blood in my local store, it was a no-brainer that I was going to buy it with the pocket money that I’d been saving. Like so many who picked up those collections, I was totally blown away – not just by the range of stories (going from gory full-on horror in ‘Midnight Meat Train’ to comedy horror in ‘The Yattering and Jack’ with ease) but also by the beauty of the language and style.

And, of course, I started collecting everything Clive did – including his excellent debut novel, The Damnation Game, and the novella that appeared initially in Night Visions edited by George R.R. Martin, The Hellbound Heart. This was the one that really changed my life, captivating me from the very first line – and anyone who has read Servants will spot my homage to it in the prologue. I just loved the whole idea of the puzzle box, the demons addicted to pain who appear when summoned by it, and the very ordinary setting of a house that could be just down the road. Needless to say, I fell equally in love with the film adaptation that Clive directed himself and which came out in 1987. Oddly, I failed to make the connection between the two at first, probably because my first experience of seeing the film was the cover (I was too young to see it at the cinema, or rent it on video); although what a cover that was, with Pinhead looming out from it! When I did eventually get to watch the movie, borrowing it from a mate’s brother, my fate was pretty much sealed… and by that I mean my fate and Hellraiser’s were destined to be forever entwined.

As were Hellraiser and Sherlock Holmes’ fates, because you see I was just as enamoured with him as I was with the world of the Cenobites. By the time Clive’s movie appeared, I’d read the original Conan Doyle tales and was religiously watching Granada’s adaptations on TV starring my favourite ever Holmes actor, Jeremy Brett. What had already struck me about all of these were the horror elements, like the foggy London streets that Jack the Ripper once trod, and – most blatantly – the ghostly glowing giant dog in The Hound of the Baskervilles. So, Holmes, Hellraiser… Didn’t seem that much of a stretch to me. After all, he’s the world’s greatest puzzle solver and the Cenobites represent the world’s greatest puzzle…that’s even before you take the Lament Configuration into consideration. It’s also probably why the original setting for the historical section of Hellraiser: Bloodline was Victorian London, before it was relocated to 18th century France. It just works…

Years later this came back to me when I was thinking about writing some Hellraiser fiction myself – this was when I was co-editing Hellbound Hearts with my better half, Marie O’Regan, and reading all the great fiction set in that world. At the same time, I was also taking my first steps towards writing some Holmesian horror, attempting to get into the Gaslight series of anthology books published by Edge and edited by J.R. Campbell and Charles Prepolec. So, as an experiment more than anything, I began thinking about how I could drop Holmes into Clive’s world – and the very simple starting point was a locked room mystery he wouldn’t be able to resist. We see it in the first chapter of The Hellbound Heart, we witness it in the very first scenes of Hellraiser. To all intents and purposes, Frank just disappears… So that was that, the idea just grew and grew, and again I was amazed by how easily the two flowed into each other – actually like they were made for each other.

It’s something I’m hearing more and more now that the book is being reviewed and it’s available to buy. Holmes and Hellraiser just fit together, it’s as simple as that. And I for one, as a fan of both as well as the author of this new novel, am extremely glad that they do. Paul Kane 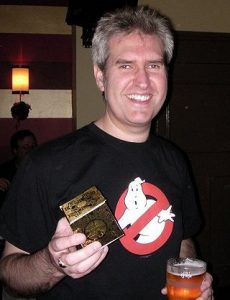 Paul Kane is the award-winning, bestselling author and editor of over sixty books – including the Arrowhead trilogy (gathered together in the sellout Hooded Man omnibus, revolving around a post-apocalyptic version of Robin Hood), Hellbound Hearts and Monsters. His non-fiction books include The Hellraiser Films and Their Legacy and Voices in the Dark, and his genre journalism has appeared in the likes of SFX, Rue Morgue and DeathRay. His work has been optioned and adapted for the big and small screen, including for US network television, plus his latest novels are Lunar (set to be turned into a feature film), the Y.A. story The Rainbow Man (as P.B. Kane), the sequel to RED – Blood RED – and Sherlock Holmes and The Servants of Hell from Solaris. He lives in Derbyshire, UK, with his wife Marie O’Regan, his family and a black cat called Mina. Find out more at his site www.shadow-writer.co.uk which has featured Guest Writers such as Stephen King, Neil Gaiman, Charlaine Harris, Dean Koontz and Guillermo del Toro.