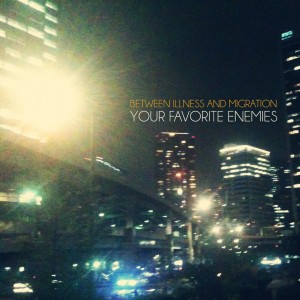 Your Favorite Enemies – Between Illness And Migration CD (Graphite)
This Canadian band seem to be big news in their homeland according to the press release, and this album will hopefully give them a deserved push to spread the name in some more far-flung places. A lot of effort has obviously gone into the creation of this record, and with a sound that can bounce from fragility to chaos to pop flawlessly the crystal clear production on here is a real winner. I am generally a fan of the rough and ready sound, but that approach would not have worked for Your Favorite Enemies. There is a depth to their sound that to my mind brings names like Tool, Morrissey or Slint to the fore – without actually sounding like any of those. The sound is built on layers of guitars and keyboards that intertwine constantly. I like the fact that the songs vary in length, from the sub-two minute intro, to seven and a half minutes of contemporary prog in “Underneath a Stretching Skyline”. The band is in no rush to compress what they have to say into three minutes but instead let the songs themselves dictate their own duration. That enables the album to flow naturally and gives the album a strong organic sound. As we seem to be living at an ever increasing pace, it is reassuring to put on a record like “Between Illness and Migration” and drop out of the rat race for fifty minutes. Essential therapy! Tom Chapman