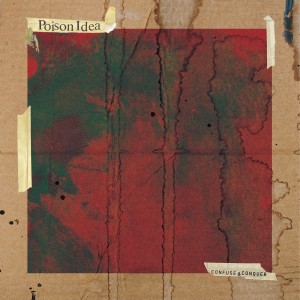 Poison Idea – Confuse & Conquer LP/ CD (Southern Lord)
It’s been a few long years since “Latest Will & Testament”, Poison Idea’s eulogy to the late Pig Champion, but in 2015 Poison Idea come are back with “Confuse and Conquer”, and it’s like they were never away. Album opener “Bog” is their mission statement, two and a half minutes of raging hardcore that is immediately recognisable as PI, with Jerry A spitting out the words over a thrashing tune with blazing lead guitars. This song could be dropped onto any of their classic albums and it wouldn’t sound out of place. Although PI are a hardcore band through and through, they have always brought a range of influences to their sound and things are no different on here. As the album progresses the straight up old school songs get the full treatment – “Psychic Wedlock” leads with a piano intro, a new version of “Hypnotic” has a very decadent New York/ Detroit sound to it, think Stooges, MC5 given the spit and polish of a Jerry A vocal delivery. Back to “Trip Wire” and it’s business as usual, but the band introduce elements of southern rock on “Cold Black Afternoon”, country music on “Dead Cowboy” and noise rock on “Reprise”. Taken as a whole it sounds like a classic Poison Idea record, but broken down track by track there is a hell of a lot going on. Overall an album that fans old and new will love and a worthy addition to the band’s massive discography. Tom Chapman