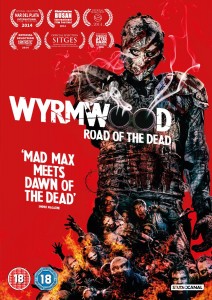 Wyrmwood: Road of the Dead (Studiocanal)
If you’re a fan of low-budget underground horrors like ‘Brain Dead’ and ‘Dog Soldiers’, you’re going to dig the hell out of this, because it has a similarly irreverent, splattery tone. And despite it being director Kiah Roache-Turner’s debut film, and despite an incredibly low budget (about £160K apparently, and only shot on weekends!), it rises above all expectations to be a really compelling, fun film. There’s lots of abrasive Aussie humour, lots of bad language and plenty of decently staged gore, but you also get a deranged plot and even a few unexpected twists on standard zombie lore. Basically the story unfolds following a strange meteorite shower that turns everyone of a particular blood type into a blood-thirsty zombie (of the high-speed ‘28 Days Later’ ilk, as opposed to a shambling meat dustbin a la Romero and co.), and sees our ‘hero’ Barry trying to locate his sister amidst the chaos, despite the efforts of an unnamed scientific organisation ruthlessly intent on figuring out how to control the zombies for their own ends. Cue lots of biting and bleeding, several imaginative set-pieces, and even the bizarre sight of a motor vehicle being run on the gastric gases from a zombie’s oesophagus! Yes, it’s pretty manic in places, and the acting is occasionally cringe-worthy, but this is a very worthy entry into the zombie/road-trip canon that is doubtless destined for cult status, and bodes very well for the future of Kiah Roache-Turner, who has an impressive grasp of the genre. Ian Glasper