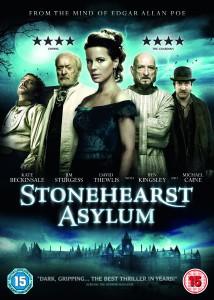 Stonehearst Asylum (Lionsgate)
Based on a short story, ‘The System Of Doctor Tarr And Professor Fether’, by Edgar Allen Poe, ‘Stonehearst Asylum’ is a brooding and dramatic study of the treatment of mental illness, with a fun – if somewhat obvious, as the plot unfolds – twist in its tale. Directed by Brad Anderson, who previously brought us the magnificent ‘The Machinist’, it’s a sumptuous looking film, crowded with shadows and candle light, with a well-chosen cast to die for: Kate Beckinsale (looking far more wounded and vulnerable than we’re used to seeing her, but no less gorgeous), Ben Kingsley, Michael Caine, Brendon Gleeson, David Thewlis (oozing violent menace)… quite a collection of heavy-weight thespians, and, as you’d expect, they bring some considerable gravitas to proceedings. It’s hard to discuss the story without dropping any spoilers, so let’s just say that not everyone is what they seem… not anyone, in fact. For all its potential darkness though, ‘Stonehearst Asylum’ never strays the really nasty side of gothic, and actually plays out a little too politely for its own good, failing to properly deliver the scares it initially promises; nevertheless it’s an entertaining and dramatic way to pass a few hours, made all the more watchable by its fantastic cast and cinematography. Ian Glasper