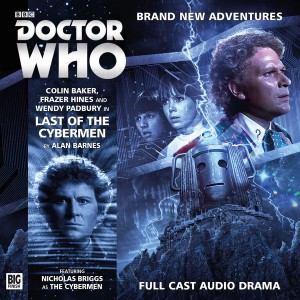 Doctor Who: Last of the Cybermen – Starring Colin Baker, Frazer Hines, Wendy Padbury, Nicholas Briggs, Lucy Liemann, Kieran Hodgson & Nicholas Farrell & Written by Alan Barnes – 2xCD / Download (Big Finish)
While the Daleks have always been, and probably always will be, the most instantly recognisable and “popular” of the Doctor’s many adversaries, I’ve always been far more frightened of (that’s the thing with childhood traumas, they tend to haunt you until the end of your days) and drawn towards the Cybermen. Maybe it’s the cold, unrelenting, emotionless way they view all other life, or maybe it’s their constant drive to conquer everything and everyone and recreate the Universe in their own image, destroying the concept of individuality and identity in the process. Or maybe it’s just that they scared me near senseless when I first saw them attack Nerva Beacon as a four year old in 1977, a televisual treat that seared itself into my subconscious and haunted my dreams for years afterwards. Whatever the reason (and I’m inclined to think that it’s a combination of all those things and more), all that really matters is that as soon as their name is mentioned in a Who related adventure, the sense of anticipation as I wait to welcome my old “friends” back into the fold becomes nearly unbearable. And when you add the Sixth Doctor and Jamie and Zoe to proceedings, I consider myself fortunate to still be here, faculties intact (or as intact as they ever are), because that’s the kind of dream team that can lead to all sorts of excitement and adrenaline overdose related problems. But apart from a persistent twitch and a strange lopsided grin that doesn’t seem to want to go away, I appear to have escaped relatively unscathed, even though I’m still coming down from the nervous high, three hours after it ended, induced by ‘Last of the Cybermen’ . Emerging from a story this good with such minor ailments is something of victory, so hooray for me, I got off lightly.

‘Last of the Cybermen’, like its predecessor ‘The Defectors’, revolves around the translocation of The Doctor within his time-stream, and this time, Old Sixy is thrown back into the Second Doctor’s era, replacing him, much to his own -and Jamie and Zoe’s – confusion. Before anyone can sit down and try to figure out why this has happened, The Doctor and his old friends become entangled in a desperate race to prevent the Cybermen rewriting history by winning the war that they fought against Earth a decade previously. It’s a feverishly paced and plotted tale of betrayal, plots within plots and plans within plans in which no-one is what they first seems to be, that further explores the mythology of the Cybermen and the war they fought against Voga and Earth and delves into Who history and traces the foundation of the Brotherhood of Logicians, while staying firmly rooted, in terms of style, dialogue and characterisation, in the era of the Second Doctor.

Even though we’re still none the wiser as to why the Doctor has suddenly starting bouncing around his own timeline, and who is ultimately responsible for it, it doesn’t impugn upon the sheer joy of this wonderful tale. As fish out of water stories go, they don’t get much better than this, with Colin Baker, Frazer Hines and Wendy Padbury, aided in no small part by a delightfully odd supporting cast of characters who rise admirably to the challenge of Alan Barnes’ incredibly involving plot that keeps you on tenterhooks, right up to the last with its seemingly endless twists and turns. Nicholas Briggs and Nicholas Farrell’s gung-ho, “retired” fighter aces particularly stand out, even amongst such a fine group, delivering performances that owe more than a little to W.E. Johns most famous creations that steal just about every scene they’re in, as both actors have a whale of time subverting, and playing with, every conceivable “old soldier” stereotype in order to bring Lanky and his Captain to fully formed, three dimensional life. My only complaint, and it’s a minor one, is that it’s too short, with so many sub-pots and ideas on offer, four parts could easily have become six, and then perhaps the ending wouldn’t have felt so rushed (which unfortunately it does), but as I said, it’s a little quibble, and I almost feel churlish bringing it up, given how much I enjoyed, and lost myself in, the drama. Oh well, never mind, all’s well that ends well. But how well this whole slipping through the cracks in his life adventure will end for the Doctor remains to be seen, as round and round he goes, but where it ends no-one knows. Still, onwards and upwards and all that old bean. Tally ho! Tim Mass Movement