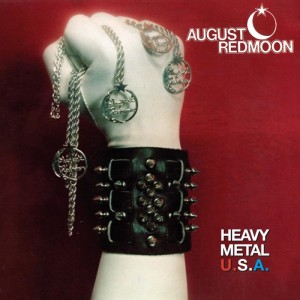 August Redmoon – Heavy Metal U.S.A. CD (HNE Recordings/Cherry Red)
Anyone remember the now highly collectable ‘Fools Are Never Alone’ E.P.? August Redmoon ruled the roost on the early L.A. metal scene before the likes of Motley Crue, Dokken, and many others completely commandeered the Hollywood empire. Taking large inspiration from the up-and-coming NWOBHM movement this quartet would never be lumped in with the aforementioned bands, as their sound was a truly honest creation of sturdy old school rumbling bass, riff laden guitar rockin’, and honest working-man vocals. Fans of the trad-metal sound should lap this up; its simplistic groupings with (early) Maiden (early) Angel Witch et al, add in the denim clad connotations and petunia oil, the overall resonance … it could easily of come from good old Blighty. With some re-mastering re-releases the initial raw energy can get lost somewhat, but thankfully here, the process has not taken any crunch from the original sound, only packing a harder punch and honing the deliverance of this ‘complete recordings’ package. With a bunch of bonus tracks completing the seventeen-song disc we get extras in the way of previously unreleased live songs, compilation songs, demo songs, basically as much as possible to make a decent full length. Having said that the first six tracks alone are more than worth the price of the CD. With extensive liner notes from L.A. heavy metal expert Bob Nalbandian, and plenty of pictures, once again HNE have put together another very well worthwhile re-release. Mark Freebase