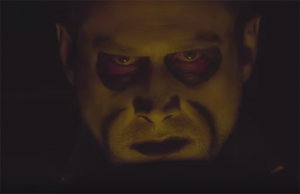 Richmond, VA quintet WINDHAND have shared an evil new video just in time for Halloween. The story goes: It’s Halloween, 1987. Four best friends are out trick-or-treating on their BMXs. Four older bullies in a muscle car have an appetite for something more sinister than candy. The video has just debuted exclusively via Bloody Disgusting, who also hosted a poster contest for the music video alongside MetalSucks, Relapse Records, and Grey Matter Art. You can view the video HERE, and check out the winning poster contest entries HERE.

WINDHAND‘s highly acclaimed new album Grief’s Infernal Flower is out now on Relapse. Their third full-length has cemented them as one of the premier metal bands of our time. The music is palpable, heart-wrenching, personal – drawing inspiration from nature and the cycle of life. It conveys an irrepressible sense of motion even within the slowest of songs. The record, one of 2015’s hardest-hitting, earned mass critical acclaim from the likes of Rolling Stone, Pitchfork, and Revolver alongside many more. NPR claimed, “[the album] transcends era and genre, thanks to the group’s ear for deceptively infectious songwriting – not to mention Cottrell’s hypnotic voice.” Grief’s Infernal Flower is available for streaming and physical purchase via Relapse Mailorder, and can be streamed or purchased digitally via the band’s Bandcamp page.