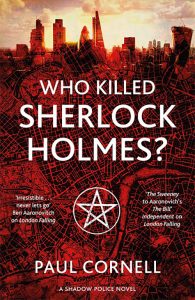 Who Killed Sherlock Holmes? is the third novel in Paul Cornell’s ‘Shadow Police’ series, following on from the events in London’s Falling and The Severed Streets. Someone has killed the ghost of Sherlock Holmes, and a small Met unit staffed by officers with ‘the Sight’ is tasked with solving the crime.

Thus begins a story that plays deftly with the conventions of Holmes (referring both to the written canon and to the various incarnations of Holmes from film and TV) and of crime procedurals to weave a plot that has many twists and turns before the dénouement. The members of Quill’s team are struggling to deal with revelations from the previous novel in the series (no details here to avoid spoilers for those new to the series) and this shows how they progress and come to terms with the situation they find themselves in now, to solve the crime before them.

It’s fair to say that the author’s written another engaging novel in this series, one that’s sure to satisfy both readers of the Sherlock Holmes stories and fans of the crime procedural. Marie O’Regan