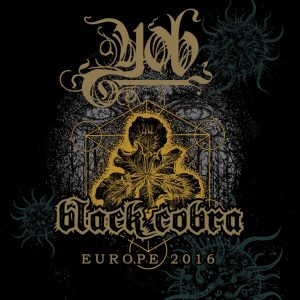 This September, and two years after the release of their critically-adored Clearing The Path To Ascendfull-length, YOB will return to Europe, delivering their purifying riff rituals across the continent. The full dates with Black Cobra as main support are as follows:

On Clearing The Path To Ascend, YOB is as formidable as they’ve ever been, demanding the tandem attention of mind, body, and soul. Drummer Travis Foster wields his signature rhythmic furor here with bombastic precision while bassist Aaron Rieseberg coils around the sonic tide with an unforgiving churn all the while in a deadly synchronicity with Scheidt’s uncanny vocal range and its pendulous movement between the triumphant howls of a medieval madman and the earth-splitting growls of a war-battered titan. Take this opportunity to revisit this remarkable album.

YOB’s Clearing The Path To Ascend is available now via Neurot Recordings HERE.

“Psychedelic rock, stoner rock, stoner metal, blues metal, ambient: all reside comfortably in YOB‘s wheelhouse, coalescing and collapsing on a path that stretches as far as the listener’s imagination.” – Pitchfork

“Mike Scheidt’s songwriting has never been stronger or more dynamic… a masterful return to form by an American doom powerhouse.” – Decibel

“The magic of YOB‘s set tonight lies in the centerpiece of their band’s latest album…all four tracks are strong and stunning, in particular ‘Marrow,’ which allows Mike Scheidt’s voice to roll out across the venue in waves of perfect sadness, bringing to life and color the slowly moving song…Mike’s singular voice is ushered in via crunching guitars and the song shifts forward towards the inescapable, earth-shattering end.” – Metal Hammer

“Sometimes, bands do the praise levelled at them justice but sometimes they outstrip them by leagues. Tonight was the latter, and then some.” – Rock A Rolla

“There’s loud, and there’s transcendently loud, and this performance of ‘The Great Cessation’ is towering, the tone so thick it’s tactile.” – Terrorizer