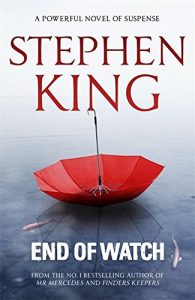 All about the fish.

End of Watch marks the culmination of the trilogy that began with Mr Mercedes and continued with Finders Keepers. At the novel’s outset, Brady Hartsfield is still hospitalised, and still in a waking coma. Bill Hodges and his partner, Holly Gibney, are still running their P.I. agency, Finders Keepers – and Bill has finally agreed to stop visiting the comatose Brady.

Then Bill gets a call from his old partner on the police force, Pete Huntley, wanting to meet up about a new case – an apparent murder/suicide. As the deaths mount up, Bill is convinced that Brady is somehow involved – and the chase is on. When Bill’s young friend from the previous novels, Jerome, returns home in response to his sister trying to kill herself, the team is back together and the scene is set for Hodge’s final confrontation with the mastermind behind the current crimes.

Throughout this trilogy of novels, King has set up an emotionally involving story of Hodges’ determination to catch his prey, providing a team that is devoted to him, and friendships that stand any number of tests. In Brady Hartsfield we have a psychopathic murderer who is so much more than he seems, and the interplay between the two sides is fascinating.

As Bill works towards the solution of the crimes, he’s dealing with a health issue of his own, but refuses to let that impede the investigation. Aided as always by Jerome and Holly, the story builds inexorably to a devastating confrontation – and no one will ever be the same.