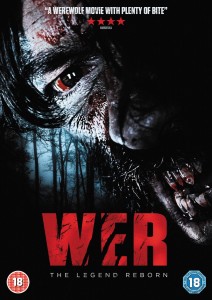 WER (Entertainment One)
Probably the best werewolf film since ‘Dog Soldiers’, ‘Wer’ is both brutal and unflinching and lends the werewolf mythos a gritty realism much needed after all that twee ‘Underworld’ and ‘Twilight’ nonsense. It’s heavy on newsreel and CCTV found footage, but director William Brent Bell walks that fine line between over-doing it and using it just enough to complement the mood of the story with confidence. The acting is assured and natural, with a startling turn from the imposing Brian Scott O’ Connor, making his (terrifying) screen debut as the afflicted Talan, and the violence is often shockingly explosive and raw. The story revolves around an ambitious public defender wanting to make a name for herself defending an underprivileged Frenchman, the aforementioned Talan, accused of the horrific murder of a holidaying American family camping in the forest near his home, her case hanging on the fact he apparently suffers from a rare medical condition that renders him physically incapable of committing the crime. Needless to say, the medical condition is more complicated than she first imagines, and she soon learns that her faith in Talan is wildly misjudged. Cue some genuinely unnerving altercations and much frenetically executed carnage amidst the rooftops and alleyways of Lyon, with everything building to an unfortunately rather predictable finale. That trope-pandering climax aside though, if you love werewolf films (and indeed grim modern horror in general) and you’ve always got your eye open for a worthy entry to the canon, ‘Wer’ does not disappoint. Ian Glasper