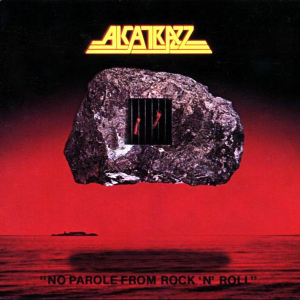 Alcatrazz – No Parole From Rock ‘n’ Roll CD (HNE Recordings / Cherry Red)
Did Graham Bonnet get inspiration from Rainbow, or did he inspire Rainbow on the direction they took? Whatever the questioning, the undoubtedly gifted vocalist has carved a legacy for himself with band and solo project alike. Originally released in 1983, after his very successful stint with Mr Blackmore, the sounds which arise from ‘No Parole From Rock ‘n’ Roll’ are a continuation (if not slightly more metallic) than the aforementioned. Mainly due to Bonnet’s relentless screams and shrieks, alongside the as yet unknown guitarist Mr Yngwie J Malmsteen. With Alcatrazz the power is there, the undeniably thought provoking ‘Hiroshima Mon Amour’, the ecstatic ‘Island In The Sun’ (both of which received heavy MTV rotation back in the day), or the Rainbow-esque ‘Jet To Jet’. With bonus tracks of the album demos in instrumental form, it’s probably only die-hards that will benefit this touch, but it’s a nice ‘extra’. Trad US 80s metal/rock does not come much better than this, and it’s a nostalgic blast from the past. Bonnet was a rock icon, a great frontman, who probably should have been given way more than he achieved. The first in a series of his career spanning re-releases, and I can’t wait for the next record. Mark Freebase