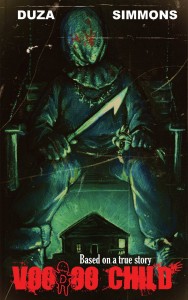 ‘Voodoo Child’ is one of those all too rare beasts that celebrates its forbearers rather than pretending they don’t exist. From the moment you first hold it in your hands you know exactly what you’re in for as its size mirrors the genre paperbacks of the sixties, seventies and early eighties rather than the larger format novels that have become all the “rage” with mainstream publishers. It looks, feels and reads like it emerged from the era in which it’s set and in today’s over-saturated market, it’s nice to see a publisher sticking to their guns and saying to hell with convention and “expectation”   Simmons and Duza’s latest offering is a tale of voodoo (as you’ve probably guessed from the title), possession, malevolent spirits, urban myth and legend and past deeds haunting their perpetrators, in which a lot of pretty young things and slightly older folks meet their maker in all manner of gruesome ways. Playing with, and incorporating, long established slasher tropes like the broken down cabin in the woods, the campsite built on the memory of a shocking history and strange “inanimate” anthropomorphised dummies and old magic, ‘Voodoo Child’ is a glorious celebration of, and ode to late seventies and  eighties slasher flicks. Set in the mid-eighties, it’s the tale of a trio of girls who venture to a supposedly empty cabin in the deep woods of the American South so that one of their number can finally come to terms with a horrific recent event and in doing so, try to find some peace. But in true horror fashion, the cabin isn’t empty and the woods hold a dark secret, one that helps trigger the terrifying tragedy that engulfs them.

‘Voodoo Child’ plunges straight into the story, letting it’s gradually build in tandem with the tension and creeping dread that fuel the plot.  The strategy of abandoning the usual two dimensional players in favour of well-rounded, fully formed characters, adds depth to the story and encourages you to care about – and invest in – everyone involved, (even though you know it isn’t going to end well for any of them). While long-time genre fans will undoubtedly figure out the central twist, there are more than enough genuine surprises to keep even the most die-hard gore-hound happy in this original, involving and disturbing tale. If you can put it down and take a break from the action once you’ve started reading it, well, you’re a better man or woman than me, because I couldn’t. Put it down, that is. And if you’re faint hearted or easily spooked, just remember, it’s only a story, it isn’t real. Keep telling yourself that and you’ll fine.  Don’t say I didn’t warn you… Tim Mass Movement