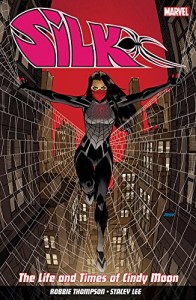 Poor old Cindy Moon. After being bitten by the same spider that transformed Peter Parker into Spider-Man, she was locked away from the world in an attempt to save her from the oncoming storm of the Inheritors.  However, while she was alone and isolated from her friends, family and everyone that cared about her, the world moved on.  Spider-Man rose to prominence and Cindy became a forgotten footnote, the hero who never was; that was until Spidey stumbled across her “prison” and freed from her captivity just as the arachnid powered heroes from every corner of the multiverse began to fall prey to the ravenous family that Cindy was originally hidden from.  Having fought, and defeated, the Inheritors in ‘Spider-Verse’, Cindy Moon, or as she’s more commonly known, ‘Silk’ was finally free to enjoy the rest of her life. ‘The Life and Times of Cindy Moon’ is the story of what she did next, how Silk became a hero in the dying moments before ‘Secret Wars’ changed everything and everyone.

Having got over her brief, passionate and all consuming “thing” with Spider-Man, ‘The Life and Times…’ opens as Cindy attempts to make up for lost time and follow in her “rescuers” footsteps. Now working with, or for as he likes to think, J. Jonah Jameson and finding herself in similar situation with her new “boss” as Pete did when he first started at The Daily Bugle, Silk finds herself at odds with the City, her friends and life in general. Her ten years of solitude have deprived her of the necessary social skills needed to deal with people and function in society, and she uses her new found hero status to block out the trauma of everyday life, but in doing so, she begins to obsesses about what she’s lost, what’s she’s missed and in doing so, becomes determined to not only find, but also find out what happened to, her family.  But when your family has, seemingly, vanished from the face from the face of the Earth, finding them isn’t quite as simple as tearing an address of the phonebook or googling their names. Nothing worth doing is ever easy though, and as her search gains momentum, Silk crosses paths with the Black Cat, meets the Fantastic Four and changes one man’s life for the better, as she becomes a little bit better at being a hero each and every day. And then there’s that ending. That final page. The one that’ll tear your heart out and stamp all over your dreams, yet at the same time, brings the first chapter of Silk’s story to a perfect end. The vibrant, energetic artwork which has an almost Manga quality that completely, and wholly, reflects and captures Cindy’s life partners Robbie Thompson’s mesmeric tale of feeling displaced by, and trying to fit into, the world superbly. Arachnid powered action par excellence… Tim Mass Movement