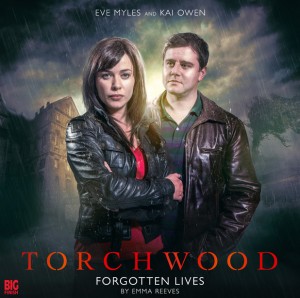 Five years. That’s how long it’s been since Gwen Cooper last saw Jack Harkness, since Torchwood stopped being part of her life and she stopped saving the world on a daily basis. It’s a long time, long enough to settle into a family routine with Rhys and Anwen, to almost forget and certainly pretend that it happened to someone else, that it wasn’t her life, she was just borrowing it for a while. But one mysterious phone-call mentioning the name Jack is all that it takes to plunge both her and Rhys back into the whirlwind that they assumed, and Rhys hoped, had abandoned them.

That phone-call leads them a nursing home in North Wales, where they bump into an old man “claiming” to be Jack, who knows things that only Gwen’s former boss could know. And when other residents of the care home start telling them that they’re not who they seem to be, Gwen and Rhys slowly but surely become entangled in the tendrils of Jack’s quest to put paid to the Committee once and for all. Having travelled to the stars to stop them, he’s brought something back with him, something that threatens the entire human race. Something that only Torchwood can stop. You can take the girl out of Torchwood, but you can’t take Torchwood out of the girl, and before you can shout “Freeze unidentified creature threatening the Earth, or I’ll blow your whatever the heck that is off” Gwen, with a little help from Rhys, is back to doing what she does best. Saving the world.  Except this time, she’s doing it one nursing home at a time.

You know those people who always tell you that you should be careful what you wish for, because you might just get it? Well, it turns out that they really don’t know what they’re talking about, because I wished that Torchwood would come back, lock, stock, barrel, Gwen, Rhys and all, I got my wish and guess what? It’s brilliant. From beginning to end, it’s a warm, engaging, funny, clever drama about people and how they see themselves, how the world sees them and how hubris can deflate and demolish even the best of intentions. And it’s also a story of friendship, loyalty and sacrifice and how some bonds, especially those forged in the heat of battle, are unbreakable.  Oh, and did I mention that Gwen and Rhys back? I did? Right, okay, well they are and it’s almost like they’ve never been away, as Kai Owen and Eve Myles slip effortlessly back into character and their endearing relationship without missing a beat. If those aliens know what’s good for them, they’d better start running for the hills… Tim Mass Movement