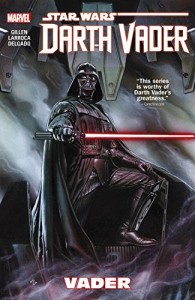 If you ask most chaps my age who they wanted to be when they were growing up, having had their tiny minds blown by the original theatrical run of ‘Star Wars’, they will inevitably reply, ‘Han Solo’. Not me though. Despite the fact that he was at the helm of the Falcon when she did the Kessel Run in less than twelve parsecs, I never wanted to be the Corellian smuggler. I always wanted to be Darth Vader. Imposing, terrifying, sinister and able to choke his enemies by just thinking about it (and manipulating the force to do so); Vader was everything my skinny, little ginger self wasn’t. If I could have been him for just a day, I’d have torn through the bullies who made my life a living hell like a chainsaw through jelly, leaving them in piles of twitching, bloody bits and pieces. Sounds weird now, and it was probably weird then, but I was a strange kid and had anger and esteem issues. But that doesn’t change the fact that deep down inside, way down in the places that you don’t want anyone to know about, we’ve all got a grudging respect for the Lord of the Sith, and I’m willing to bet that many of you, as soon as you saw the title of this book, started humming ‘The Imperial March’. And, thanks to Kieron Gillen and Salvador Larroca, we can embrace that inner darkness and the adventures of the Emperor’s Apprentice.

Set in the immediate aftermath of the destruction of the Death Star, ‘Vader’ follows the dark champion as he struggles to come to terms with what his Master regards as his failure to prevent the Rebel Attack. Forced, by events, to question the nature of his relationship with The Emperor, Vader starts to suspect Palpatine of plotting against him, and sets out to discover if his suspicions have any foundation. Taking him from Tatooine to Geonosis, his quest for answers sees him cross paths with Jabba, meet Boba Fett for the first time and acquire his own pair of droids – the counterpoints to, and direct opposites of Threepio and R2 – before finally unearthing the secret that the Emperor has been keeping from him.  It’s here, as he travels from one side of the galaxy to the other seeking the “truth”, that he begins to doubt his Master, that he starts thinking for himself and embarks on the journey that will eventually lead him to reconcile with his son at the end of ‘Return of the Jedi’.  ‘Vader’ is a story of the petty jealousies and emotions that fuel the worst parts of the human (and alien) spirit, the corruptive nature of power, in fighting and political struggle, love lost and the slow path to redemption. It’s absorbing, captivating and engrossing, it looks incredible thanks to Larroca’s gorgeous art and Gillen’s tightly plotted, character driven, intelligent tale lets the power of the dark side flow in all its magnificent glory. All together now, “Dah dah dah dum da da dum da da”… Tim Mass Movement