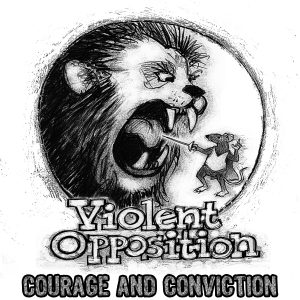 Somewhere, hidden far from the prying eyes of man, its location a closely guarded secret kept by the longest serving, and most loyal members of the scene police (all of whom were originally inducted and appointed by Jello Biafra) is a rehearsal pad in which the genetically modified clones of Victims Family and Cryptic Slaughter busy themselves, day after day, with writing songs whose only purpose is to provide the fuel for a pit that stretches from one side of the globe to the other. This band, whose tunes simultaneously overload the adrenal gland and cause the cerebellum to explode (in much the same way as that chap’s head did in Scanners) are known as Violent Opposition and Courage and Conviction is their manifesto for the creation of a worldwide circle pit.  Prepare for their declaration and get ready for the global slam-a-thon. Just don’t blame me if your head explodes…  Tim Cundle