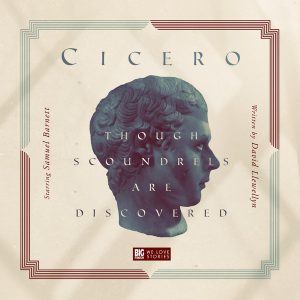 The human fascination and obsession with murder can be traced back to, if you believe in such things of course, the first incident of recorded fratricide, when Cain struck down Abel.  We are, as a species beguiled by death, and our transfixion with it, especially the violent variety, lies at the heart of one of most popular forms of entertainment, the murder mystery. And when this cornerstone of leisurely distraction is coupled with another staple of human delectation, the historical drama, as it is in Cicero, it becomes an almost irresistible vice.

Set in Rome, nearly a century before the birth of Christ, Cicero is the story of two brothers, Marcus Tullius Cicero and Quintas Tullius Cicero, making their way in the legal profession who are charged with proving the innocence of a rich farmer, Sextus Roscius, accused of killing his father. Their investigation takes them to the dark centre of Roman politics and immerses them in the fetid depths of corruption, betrayal, treachery and greed as they fight for the life of an innocent man trapped in swirling the machinations of a den of vipers.  And the deeper they stare into the abyss of perfidiousness and duplicity, that also threatens to engulf them, the more convinced Marcus and Quintas become of their client’s innocence and the more determined they become to clear his name and prove his probity in front of the senate and all of Rome.

Cicero’s brisk, enticing and intelligent plot combines the worst of vices with the most noble of the human intentions in a story that pits the individual against the state and champions the underdog’s continual struggle against the disinterest and dishonesty of the establishment. The attention, and devotion, to historical accuracy, character development and interaction is second only to the deliciously dark scheme that lies at the core of a tale that’s brought into brilliant being by a top notch cast led by Cicero himself, Samuel Barnett. It is, as Marcus Quintas fellow citizens would say, egregie prorsus…  Tim Cundle