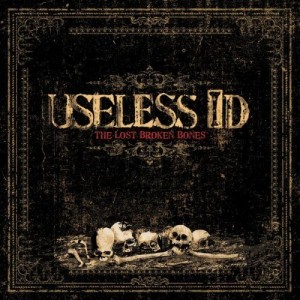 Useless ID – The Lost Broken Bones CD (Fat Wreck)
This release brings together Useless ID’s hard-of-find 2008 album, with a bunch of bonus tracks recorded in that same era, making an impressive collection of 19 songs. Hailing from Israel, Useless ID are prime evidence of how the “Fat Wreck” sound became a global phenomenon and has pretty much become a staple starting point of reference for all melodic punk and emo bands to have trod the boards ever since. Although they are cut from that blueprint, Useless ID have, over the years, perfected their own take on the genre. Anthemic, catchy and rocky, but with the right amount of melancholy, creating a bittersweet taste. Yes, it is uplifting, but with enough sting in the tail to let you know that underneath the surface, all is not well in this world. This was recorded by Jason Livermore and Bill Stevenson at the legendary Blasting Room studios, and those guys know their craft inside out, bringing out the best that Useless ID have to offer. As I was listening to this, I did almost double-take when the track “Night Stalker” came on, as it’s chorus is basically Ignite’s “Veteran”, if not a one-to-one copy then a damn close imitation! Overall this album is a testament to the timelessness of this genre, and for those of you seeking out the last musical rays of Summer, then grab yourselves these last lost broken bones. Tom Chapman