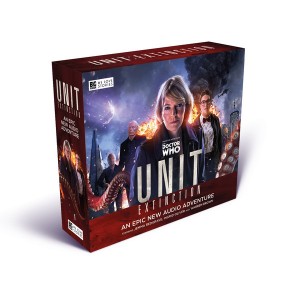 I’m not afraid to admit that I was hand-clappingly chuffed when I heard that there was going to be a series of new UNIT (‘NUNIT?) audio adventures. I was a child of the seventies, so Brigadier Lethbridge-Stewart and his (hapless) crew played a large part of my growing interest of Doctor Who, and I am thoroughly enjoying JemmaRedgrave’s portrayal of Kate Stewart in today’s reworking of the televised series.  She’s really made her own mark in a more contemporary UNIT while still, clearly, being very much her father’s daughter. Oh, and I’m loving her dry wit too. Another well-loved member of contemporary UNIT is fan favourite Petronella Osgood. She’s asthmatic, possibly a Zygon and the televised embodiment of all of us Converse-wearing, bowtie adoring, scarf-donning aficionados. Yes, Osgood can carry off aquestion-marked lapel, but she’s also clever and resourceful, and thanks to the events of the Day of the Doctor, she is vital to UNIT, world peace…and to this story.

And while I’m in the mood for reminiscing, something else that I still associate with ’70s Who are the Autons.  They’ve appeared a couple of times since 2005, but somehow they still feel entrenched in an earlier time. My fan-girl heart leapt then, when I listened to this first in a series of audio adventures. It’s UNIT versus the Autons, so it’s proper nostalgia for an old lady like me, but with a fresh and modern twist.  And the plot?  Well, without giving anything away, I’ll just throw a few questions into the mix. Why are huge, semi-sentient meteors landing on Earth? Who are FutureTech, and why are they so keen for everyone to own one of their brilliant new 3D printers..?

Of course, the answers to all of these questions can be discovered by listening to this rather brilliant adventure, so I’ll finish with this. The real test of any Whoniverse off-shoot (for me) is whether it works well on its own, or if there is an obvious Doctor-shaped hole that feels like it need to be filled.  Hand on heart, I can say that I didn’tthink of the Doctor once.  This story stands boldly on its own, is beautifully paced (and produced), well acted by people who are clearly enjoying themselves and is a proper, real treat.  Bring on the next adventure! Rebecca Ferriday