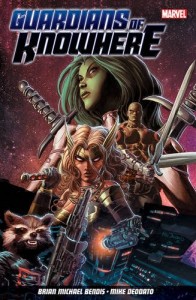 I guess I’m a little out of the loop as I’m yet to catch up on ‘Secret Wars’ and the whole swathe of changes that it’s brought to the Marvel Universe. That said, ‘Guardians of Knowhere’ is the first time I’ve been exposed to everything that’s happened and it’s my initial foray into the new, post event world. Having now dipped my toe, so to speak, into this new, exciting and vibrant ocean and despite it being a little chilly in the beginning, things soon warmed up.

The story starts with the Guardians, formerly of the Galaxy and now of Knowhere, minus Quill and Groot (which sort of gets explained later in the book), are now holed up in the head of a Celestial (Knowhere) that’s in Earth orbit, having sworn to protect it.  It seems that everyone is labouring under the delusion that Doom (as in Viktor Von) is their divine protector and directly responsible for everything that they have, and are. As with all “benefactors”, and reverting to type, he enforces his godhood and law with the help of his guard, one of whom, Angela, is sent to Knowhere to deal with Gamora who, thanks to her power upgrade in ‘Black Vortex’, is beginning to question all that Doom is, says and demands. It’s a battle for the ages that rages throughout Knowhere, bringing it to the attention of the Nova Squad (now including Iron Man!), and that ends up becoming incredibly messy and squishy (and not in a good way) when a stray Kree warrior gets, somehow, drawn into it. And if that’s not enough to hook you in, Drax and Rocket’s dispute with a  would be criminal overlord reaches boiling point, becoming physical right about the same time that Gamora and Angela’s does – and culminates in much the same way. With a familiar face appearing toward the end to soften things up a little, ‘Guardians of Knowhere’ poses more questions than it answers, but thanks to the almost non-stop action and intriguing story-line, the questions gradually dissolve into cliff-hangers that you just  know are going to be explained somewhere further down the line.  And that’s also when you realise that Bendis, with a little help from Mike Deodato’s mind-bending images, pencils and arts, has got you. He’s sucked you in, and drawn you right into his incredible fable, and while the bigger picture is still a little blurry, it’s enticing enough to make sure that I’m going to be sticking around, because I have to find out what happens next. I just have to. Come on in, the water’s fine… Tim Mass Movement