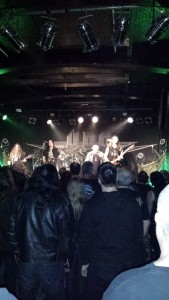 U.D.O. – Queens Hall, Nuneaton, UK. 03/04/15
So first encounters with this venue… and it was worth the visit to be honest. It will be marked on the ‘return to’ list – decent size, good stage set up, and with a PA that delivers!
Sister Sin opened to a sizable crowd, a good reaction and pummelling songs from the excellent ‘Dance Of The Wicked’ and ‘Now And Forever’ albums, they held their own which was to be no mean feat amongst the battalions of trad-metallers who congregated for the up-coming German metal machine. Another time, and another setting, this quintet will be a must see act, but tonight was all about the headliner.
The Scorpions may well be one of the best-known German acts ever, but Udo Dirkschneider is the strongest frontman representing metal, ever to emerge from the country. A powerhouse voice, a truly epic metal icon, and sorely missing from UK shores for far too long.
The pre-set song ‘Fight For Your Right’ (Beastie Boys) was aptly timed as the lights dimmed, and the stage strobes turned forward shadowing the camouflage nets; a combat dressed setting became apparent and carried a truly heavy image. “Ladies and gentlemen… THE TANK IS BACK” bellowed from the sound system and the shear power of the band pinned down the audience as the stage presence of the legendary vocalist evolved. With U.D.O. it is still all about the voice, sure the songs are there, but who else could carry this performance with such conviction. The audience is treated to a show of lights and premium sound; this is not just setting up and playing a pub gig. It had been a long time since the band had performed here, and they were making up for lost time. 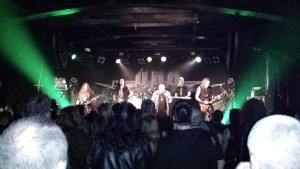 Treated to a variety of U.D.O. (group) songs it’s when new track ‘Decadent’ is aired the appreciative crowd hungrily join in with the singing (only the fourth track in). This alone confirms this gig is not relying on past glories. With strong releases in ‘Rev-Raptor, ‘Steelhammer’, and the newly released ‘Decadent’ it’s no easy choice for the band to play all the crowd ask, but each song is delivered with shear passion and totally crushing heaviness. ‘Metal Machine’, ‘Metal Eater’ and ‘Break The Rules’ sit comfortably in a set which only features one Accept song mid-way… the majestic ‘Black Widow’ brings in a few nostalgic smiles. All this in a weighty 1hr 45min performance, Udo was certainly not going away quietly. Hanging in until the very end was a real treat for old schoolers like myself. ‘Metal Heart’, ‘Fast As A Shark’ and ‘Balls To The Wall’ are true headbanger favourites, sounding as good as the day Accept released them. Great to hear, but not a reliant part of the set, as this band pack the punch where ‘Russian Roulette’ left off. Chunky riffs, and a solid metal feel ooze from U.D.O. and as the aging frontman shows, he is as authoritative now as he ever was, delivering the notes and conveying a performance of strength and professionalism. Now lets see U.D.O. at Download festival… it would be a triumphant return. Mark Freebase