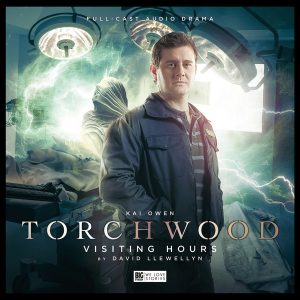 Finally, it’s nice to see the unacknowledged and all too often forgotten everyman hero Rhys Williams take centre stage, step up to the plate and show the world that there’s far more to him that just being Gwen Copper’s husband.  Stepping out from the formidable shadow cast by his wife, Rhys while visiting his mam in hospital following her hip replacement, accidentally stumbles across a time-travelling conspiracy to harvest the organs of healthy patients in order to prolong the lives of the “elite” and the rich and shameless.  Discovering that his mother is on the most wanted list of this mysterious surgical team, Rhys hatches a desperate plan to save both his life and that of his invalid (for the moment at least) mother. Admittedly, the plan mostly involves running away and hiding, but it’s exactly the sort of idea that most people would come up with. And that’s why the story works so perfectly, because it could be any one of us in Rhys’ position and we’d probably act the same way. And when I say could be, it would of course depend on whether or not our better half was part of a secret organisation set up to defend the Earth from all manner of alien, other-worldly and extra dimensional horror. You know, just like Rhys’ is.

Anyway, in between the running and hiding and the odd bit of incredibly satisfying violence, he manages to stay one step ahead of the creepy Burke and Hare chrononauts pursuing him and his mam through the darkened halls and rooms of the hospital, their mad Doctor boss and, incidentally one my favourite bits of this wonderful tale, killer robots. That’s right; Visiting Hours even has Rhys defying the cold, logical will of mechanical monstrosities whose sole function, on this occasion, is to eradicate any, and all, traces of the morbid and clandestine operation haunting the hospital.  This, unhappily for them, includes Rhys and Mrs Williams.

Visiting Hours is a furiously paced, blink and you’ll miss it, character and driven drama that makes the most of its magnificent cast, especially the rather brilliant Kai Owen and Nerys Hughes (as Mrs Williams), whose innate chemistry and ability to bounce off each other and create an endearing and believable relationship, adds an extra layer of thumbs up enjoyment to an already delightful story. Exceptionally well written, David Llewellyn’s adventure will also strike an immediate chord with anyone who grew up in South Wales during the eighties and nineties. The dynamic that exists between Rhys and Mrs Williams encapsulates and reflects the familial bond that exists between every single Welsh male (and maybe female, I couldn’t comment on that. Because, you know, I’m not. Female that is) and his mam.  Da iawn Rhys Williams, da iawn chi… Tim Cundle