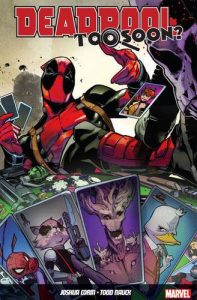 Imagine if you will, that at some point in some dark and mysterious underground laboratory (you know one of those old stone cellar affairs with orbs of crackling electricity complete and a semi-intelligent reanimated, stitched together cadaver lurking in the corner)  Agatha Christie had, through some wide ranging four colour conspiracy involving time travelling literary agents, started writing for Marvel and during the course of her new endeavour employed not only H.P. Lovecraft, but also Larry, Curly and Moe as her creative assistants. Can you picture the scene? You can? Good.  Because Deadpool: Too Soon? is the book that the strange creative cabal would undoubtedly have spent many narcotic infused hours bringing to life. It’s a murder mystery that begins with Wade, his demon bride, Rocket, Groot, Squirrel Girl, Spider-Ham, The Punisher, Howard the Duck, Ant-Man (Scott not Eric, sadly) and Forbush Man being furtively invited (yeah, you can guess who sent out the notices) to a get together, and ends with all of the said attendees of the party dying, one by one, in incredibly horrible ways that mostly involve decapitation.

Deadpool being Deadpool doesn’t like messy incidents, unless he’s the one responsible for causing them; and also doesn’t like anyone ruining get-togethers and so sets out to discover just who the murderous party pooper is before he or she can get around to doing away with Wade Wilson once and for all.  But some crimes are better left unsolved, as in the mayhem packed, homicide filled adventure Too Soon? an escapade that sees him teaming with Squirrel Girl and Howard the Duck, seeking the advice of the Sorcerer Supreme and trying his hand at producing mystical chimichanga’s. Deadpool’s investigations eventually lead him to the place, and person, he would never have suspected. Well, actually that’s not true, as crazy Wade suspects everyone, all the time, but as he doesn’t like what he finds, he should never have gone looking for it. Or, you know, something like that.

Joshua Corin and Todd Nauck, the guys responsible for channelling the essence of Howard, Agatha and the Three Stooges into Too Soon? have crafted, written and illustrated a veritable monster of a Deadpool tale. It looks good (truth be told, it looks incredible) and once you get stuck into the story, you’ll be hooked. Just don’t be put off by the withering looks that your loved ones will give you when you burst into spontaneous giggling fits at Corin’s laugh out loud funny, snappy and enthralling dialogue and characterisation and the often uncomfortable, but hilarious, interaction between Wade and his “friends”. Too Soon? has all of the vital ingredients needed to make a Deadpool story into…Well, a Deadpool story and it even adds a little hot sauce and few secret ingredients of its own, just to you know, get the juices flowing faster and the adrenaline pumping that little bit harder. So, who did it? Who’s responsible for the caped killing spree? Only Wade knows.  And if you want to know what Deadpool does, you’ll do the right thing. You’ll read Too Soon?… Tim Cundle