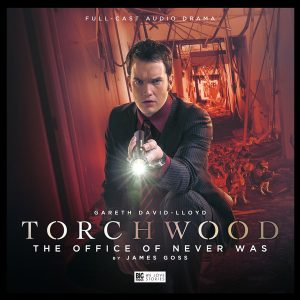 Each and every single one of us will at some point in our lives be confronted with, and will have to face our own long, dark night of the soul. The trial by conscience that weighs individual actions, good and bad, against each other and determines – while the psyche is held imprisoned in the dock of the soul watching events slowly replay themselves – whether or not we have achieved everything that we wanted to and if we are as righteous as we believe ourselves to be. However, if you work for Torchwood, the long, dark night of the soul is something that you have to face on a regular basis as – to paraphrase Ferris Bueller – the lives of the employees of the first, and last, line of planetary defence move pretty fast and are, more often than not, in a state of constant flux.  For Ianto Jones, his latest encounter with that brand of darkness catches him unawares when he decides to investigate, after being rudely interrupted on a Friday night, a deserted, and apparently haunted, office block. As beginnings to the weekend go, it’s not exactly his favourite and when he starts hearing voices, bumps into people who’ve forgotten who they are, is pursued by rats and the bodies begin to appear, he can’t help but shake the feeling that this particular building really doesn’t like, and has something incredibly nasty planned for, him. And the longer he’s trapped inside it, the worse things get as Ianto Jones’ erased and repressed past finally catches up with him.

I like Ianto. Not in the same way that the vast majority of the internet seems to like him, but I genuinely have a soft spot for the character. He’s not the most obvious, in fact he’s probably the least likely, action hero you’ll ever stumble across, but no matter what happens, he always steps up to the plate, digs his heels in, doffs his cap at danger and gets stuck right in.  Seemingly unafraid of the things that go bump in the night, when he’s forced to confront his “misdeeds” in The Office of Never Was, he does so head on, knowing that he did what he did because duty demanded it and when you’re in the Torchwood fold, that duty is more often than not a harsh, unforgiving and merciless mistress.  Building it’s plot around the idea that no-one can ever really escape from, or change, their past, James Goss’s story is a tightly constructed tale that keeps the listener in suspense and guessing right up until the final act thanks to its superlative writing and the marvellous performances of its cast, led by the always on top form Gareth David-Lloyd.  He may not step out of the shadows as much as he used to, but when he does, Torchwood’s Coffee maestro always, no matter what it takes, gets the job done… Tim Cundle