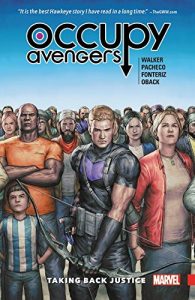 For a while, during the whole second Superhero civil war and following the death of Bruce Banner, it really did look like Hawkeye’s goose was well and truly cooked.  Forced into a position that, after making a promise to a friend, he never imagined that he’d be in, Clint Barton in an attempt to protect his comrades in arms and feeling as though he had no choice, did the unthinkable. He took the life of one of his oldest, and dearest, colleagues. Vilified by the superhero community and regarded by the populace at large as a hero, he was tried for, and found not guilty of murder in court, and set free. With no-one to turn to and nowhere to go, Hawkeye like a modern day Kwai Chang Caine, hits the road and sets off to find himself and rediscover his purpose. But some folks just can’t stay away from trouble as it has a habit of seeking them out and almost daring them to stop it, and Clint Barton is right at the top of troubles list.

Taking Back Justice is the opening arc of Hawkeye’s “solo” adventures, which see him picking up a new “sidekick”, Red Wolf, when he steps in to the breach to save a Native American Reservation from the stratagems and designs of the corporate world and then adds another member to the team while defending a secret S.H.I.E.L.D. installation from falling into the hands of some very undesirable elements.  Written by David F. Walker (who is fast becoming one of my favourite four colour authors), Taking Back Justice is far more street savvy than almost any other Avengers title; and it’s a tough, gritty, bruiser of a story that highlights the notion that one man, if he has enough determination and idealism, can stand up and make a difference in face of relentless political, social and corporate subjugation. It’s a tale of heroes, of men and women, taking the fight to the one percent on behalf of the ninety-nine and slowly chipping away at everything that the minority have built in order to make life better for the majority. And it also looks amazing, because with Pacheco doing what he does best and bringing his a-game to the book how could it not? Hawkeye just hit another bullseye… Tim Cundle