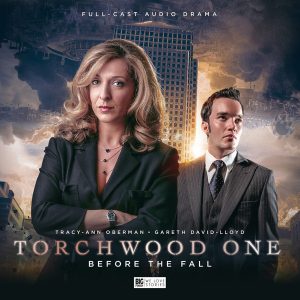 As motivational factors go, revenge is situated somewhere close to the top of the ‘Reasons-to-do-crazy-things’ list. It’s a powerful emotional drive that can tip even the most rational of individuals into the chasm of insanity and when it’s coupled with cold hard reason, cunning and plenty of time to plan its execution, it becomes a compelling plot device, dwelling at the heart of recognised classics such as The Count of Monte Cristo and The Stars My Destination. Retribution as a reason for action is, it would seem, something that each and every single one of us can instantly relate to and understand, having felt it’s all-consuming grasp at some point in our lives. And in Before the Fall, the very human need for revenge and the unfulfilled desire it always promises brings Torchwood to its knees and nearly plunges Earth into an intergalactic war.

Fuelled by the slow burning, espionage heavy, paranoia favoured by John Le Carre, Torchwood One is an intimate character centric tale in which Torchwood One’s normally black and white world is suddenly exposed to myriad shades of grey. Intelligent, meticulously paced and plotted, over the course of three parts (New Girl, Through the Ruins and Uprising), this mini-series explores how even the most seemingly security conscious organisation can be thrown into disarray by the actions of  single individual sowing seeds of distrust and how the fraught relationships between galactic neighbours are held in delicate balance thanks to the dedication and focus of the “real”, and unsung, heroes who keep their world safe from the unseen perils and dangers of the universe.  And if that wasn’t enough to draw you into Before the Fall’s intricate and enticing web, it’s also filled with enough action, black humour,  gritty street level violence and jaw dropping spectacle to please even the most hardened fans of political thrillers, human drama and conspiracy heavy Science Fiction.

The performances, much like the writing are all exemplary, but the core trio around whom both Torchwood and the story revolve; Yvonne Hartman, Ianto Jones and Rachel Allan (played by Tracy-Ann Oberman, Gareth David-Lloyd and Sophie Winkleman), add an extra spark to the tale that transforms Before the Fall from something great into, as Dave Bowman so famously said, something wonderful.  Listen to Dave, he knows what he’s talking about… Tim Cundle