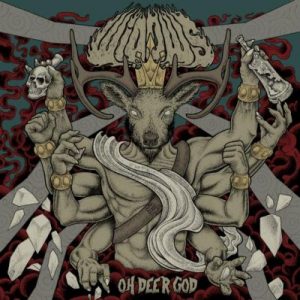 I’m sure that everyone is familiar with the concept of ‘the long night of the soul’ and has, at some point in their life, felt the grasping hands of despair attempt to simultaneously drown them in sorrow and worry while slowly throttling them with ice cold, unfeeling fingers of self-doubt and loathing. Yeah, those black moments of depression from which there is seemingly no escape have, in the last eighteen months (thanks to the collective stupidity of humanity and its willingness to buy into the false promises and political flim-flam of those who exist only to perpetuate the illusion of “freedom”), reached epidemic proportions. But fear not my friends there is a cure; a way to escape the humdrum banality of the unchanging rollercoaster ride that we’re all chained to. It’s called Oh Deer God. And it is a blitzkrieg battery of thunderous, bone shaking riffs and power that hits like the bastard offspring of Kyuss, St. Vitus, The Obsessed and 16, knocking you off your feet, before dusting you down and lifting you up, reinvigorated, reborn and ready to face any, and all, of the bullshit that the world feels like hurling at you. Oh Deer God is like turning the ignition key in a ’69 Camaro SS and hearing the engine fire for the first time, like feeling the first rays of the sun on your face after a month of rain, like watching footage of Chuck Yaeger tear through the sonic barrier for the first time and it’s beautiful sonic, balls-out, heavier than a dwarf star at galactic centre symphonies are a guaranteed cure all for whatever it is that ails and plagues, you. Meet Widows. They’re here to save the world… Tim Cundle