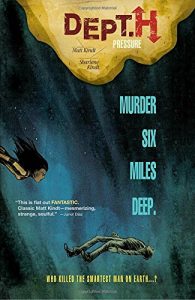 Dept. H. Depth. That’s one pretty cool conflation I wish I’d thought of. But I didn’t. It’s down to Matt Kindt, damn him, who both writes and draws Pressure, the six-issue adventure from Dark Horse collected herein. Both Dept. H and Kindt are new to me – I don’t anywhere near keep up as much as I should on the graphic novel front these days, but then there are so damned many – and what I find is … different, a paddle in a strange sea, a locked-room mystery in an extreme setting that offers just what it says on the tin … Murder Six Miles Deep.

Dept. H, see, is an underwater research facility under the auspices of an organisation called USEAR, who deploy our heroine, Mia – in backstory shown to be much more at home in space – deep beneath the waves, into the antithesis of her comfortable environment, to find out who bumped off her dad. It’s a literal voyage of discovery for her, featuring a cast of unusual suspects and situations that sometimes go overly out of their way to point out the depths of the ocean can be just as lethal and strange, if not stranger, as what lies within Mia’s experience.

It’s all well and good if you can take to Kindt’s artistic style – and from acclaim and awards many have – but it does and at the same time doesn’t do it for me. There is some outstanding imagery, for sure – the Sardine Suit, the Ghost Diver, a distant relative of the Great Pink Sea Snail – all highly suggestive of the work of Jean-Claude Forest, but for the most part it looks like storyboard stuff: the sketched beginnings of something that could really have been quite beautiful, but isn’t. I find it all a bit Emperor’s New Clothes, if I’m honest, but clearly Depth is a matter of perspective.

The writing works at about the same level – workmanlike, though nothing revelatory – and as the six issues reach their ‘to be continued’ conclusion (for this is only Volume 1) you’re left not so much with feelings of excitement and anticipation as a desire for Kindt to just get on with things.

It ain’t awful, it ain’t brilliant – at the end of the day it’s another in an endless line of graphic novels these days that seem to send the youngsters into paroxysms of excitement but leave us oldsters feeling a bit been-there-done-that; that it’s all a bit so-so.  The true telling of its worth will come in how the mystery is resolved, and maybe, just maybe, I’ll up my score then. For now,  5.5/10. Mike Wild