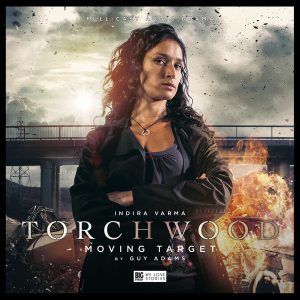 They keep killing Suzie and they keep bringing her back.  However, while the long deceased Suzie Costello is firmly back in the Torchwood fold as the “hero” of the hour in Moving Target, as the story takes place before she died for the first time, the whole returning from the afterlife schtick that made her “famous” hasn’t happened to this Suzie and it’s something that her future self has to look forward to. That said, there are glimpses of the Suzie that we’re all too readily familiar with in Moving Target; the self-assured narcissist who values herself and her job more than those she’s sworn to protect rears her head every now and then, especially in the closing minutes of the drama.  Taking place, as the other Committee related Torchwood stories do, sometime prior to Gwen Cooper joining the team, Suzie’s find herself caught up in their affairs after they (the elusive they, otherwise known as The Committee) designate humanity as a “pest” and thus open the floodgates for Galactic Hunting Companies and their rich, odious clients to bag a trophy or two on Earth.

After being woken by a rather insistent alarm, Suzie Costello finds the world locked in a single moment of time. Being a member of Torchwood, she isn’t exactly shocked to find that the pause button was pressed by extra-terrestrials, but she is more than a little surprised when she finds herself protecting the only other person, a woman called Alex, who is immune to the effects of the “time weapon” from a seemingly endless gaggle of alien big game hunters. As the cat and mouse game intensifies, and not being a target of the hunt herself (that “pleasure” being reserved solely for Alex), the only thing that keeps Suzie going and protecting her charge is her sense of duty, after all she’s sworn to defend the Earth from all alien threats. Duty however, will only get you so far, as trapped in a no-win situation with no-escape in sight, Suzie has to face some incredibly harsh truths and difficult decisions. Guy Adams tale rattles along at a fantastic rate, and featuring as it does a compact and razor sharp cast, is as reliant on its acutely observed and wonderfully constructed characters and dialogue as it is on its terrific golden age of Science Fiction styled plot. Questioning perceptions of life and intelligence, the value we put on both and the way we see ourselves and others, Moving Target goes someway to explaining how Suzie became who she did, and paints a much more sympathetic, relatable and likeable portrait of her than the original series ever did. They keep killing Suzie and then bringing her back. Hopefully, this time, she’s back for good… Tim Cundle