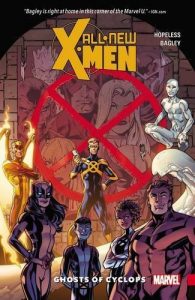 After being dragged through time to the modern day by Beast in a desperate attempt to stop grown up Cyclops becoming a totalitarian monster, the original X-Men have been bounced from pillar to post and hung out to dry on more occasions than any of them would probably like to count.  As rough as it was for mutants in the sixties, thanks to the fanaticism of Charles Xavier’s former Golden Boy and his merry band of crusaders, things are a lot worse in the new millennium, and the target of most of the public outrage just happens to be the X-Men.

While the whole team is having a hard time adjusting to their chronal home, in The Ghosts of Cyclops, things are a lot tougher for Scott Summers. Unable to understand or comprehend what drove his older – now deceased -self down the path that he chose to follow, Scott has abandoned his friends and hidden himself, or more accurately his powers, away from the world. And seeking the anonymity of the company of strangers, he aims to mask his embarrassment, anger and shame about the man he was destined to become. At least, that was his plan before the Ghosts of Cyclops, a rabid band of young mutants dedicated to keeping alive the memory of the “hero” they named themselves after appeared. Watching them spread their message of hatred is too much for Scott and he elects to track them down and stop them, whatever the cost. Which is pretty darn high, because as well as delivering some of the most spectacular mutant action and eye popping artwork (Mr Bagley, I salute you sir) that I’ve stumbled across in many a moon, it also earns Scott and one of the Ghosts a ticket to the gaol house. Meaning that, inevitably, the rest of the X-Men (who are touring the US, off fighting crime and busy doing their own things) turn up to rescue him, just as the Ghosts do to help save their captured brother.  And two teams driven by opposing belief systems and the police all jostling for position in such close proximity, was never going to end well, and once again, Mark Bagley has a field day as he serves up another dose of high octane super-powered punch ups, which ends in tried, trusted and true X-Men fashion.

The pencilling god is on a role, as in the second half of the book in which the team have relocated to Paris, the X-Men end up in a bruising war of attrition against the suave, not quite sophisticated, terribly uncivilised and perpetually hungry Blob.  As hard as they fight, Blob fights harder and turns them inside out, both physically and emotionally, as their conflict with the (much) larger than life villains mirrors the emotional turmoil that each of them is haunted by and suffering from. Bobby reluctantly trying to come to terms with his sexuality, Cyclops finally being at peace with himself, the breakdown of Angel and Wolverine’s relationship and Idie’s fractured faith and belief in a higher power. Oh, and the ending? That’s something special, one you’ll never see coming that, and  if you’re anything like me, it’ll ensure that you turn up at your local comic shop, cash gripped tightly in your sweaty hands, demanding that the owner immediately adds all of the further issues of this book to your pull list.  Of course, none of this would have been possible without the guiding hand of Dennis Hopeless who’s, and let’s not beat around the bushes here, brilliant story hurtles through, and buzzes around in, your imagination. It’s a story bolstered by the snappy, energetic and often laugh out loud funny dialogue and the astonishing characterisation that not only fully fleshes out the members of the team, but also creates a fantastically dysfunctional, yet warm hearted, dynamic within the ranks of Marvel’s premier mutants.  Hopeless and Bagley, in the six issues contained in this book, have proved themselves to be that rarest of rare things from Rareville, a partnership that exceeds expectation and goes above and beyond the call of duty. You know what Stan Lee would say don’t you? Yeah, that’s right… “Excelsior!”  Tim Cundle