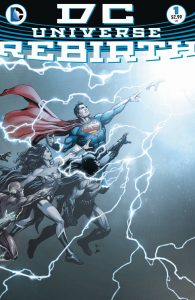 Change isn’t always a bad thing. Granted, it isn’t always good either, and sometimes it isn’t even necessary; but that doesn’t mean that it’s something to be feared. French novelist Jean-Baptiste Alphonse Karr, once famously said that “The more things change, they more they stay the same”. That was never more true than in the world of comics, where fandom has not only become accustomed to major upheaval in which established mythology and canon are turned upside down, but has come to expect it.  Frantically stabbing the reset button to facilitate to introduce new concepts, ideas and characters has become the norm, and for the most part the “major events” that the switch being flipped instigates, are something that the majority takes in their stride, because we all know that nothing is permanent in the world of comics and capes. Not even death.

And that whole not staying dead thing? That’s what lies at the heart of, and is primarily responsible for Rebirth, the massive paradigm shift in the DC Universe that destabilizes everything that happened leading up to and during the course of The New 52. The enormous, and frankly terrifying, responsibility for ensuring that this transition from what is to what was and will be once again, lies with none other than Geoff Johns who in the super-sized, eighty page spectacular DC Universe Rebirth not only brings back a much beloved, and missed, character, but also weaves a fascinating, dialogue heavy, emotive character driven tale. Faster than the hero it returns to the land of the living, Johns’ story not only finds a plausible (as far as comics are concerned) reason to discard the events of the last however many years it’s been, but by wearing its heart on its sleeve and utilizing a first person narrative told primarily from the perspective of Wally West (c’mon, we all know he’s who I’m talking about, so let’s not pretend that I’m giving anything anyway), it immediately draws you in. It feels like you’re the only person in the world that Wally is telling his tale to.  This establishes an immediate and very human connection between creator, character and audience, something that all too often is missing from twenty first comics. And while I’m all too aware that using another Flash to change the world again, just as Johns did with Flashpoint, could be viewed as over-playing a winning hand, when it’s done as thoughtfully as it is in Rebirth, you won’t care about the similarities. In fact, you’ll probably think, just as I do, that it’s an adroit and adept usage of the character, in that, one Flash was used to remodel the world and another was used to return to its natural state.  There is, of course, a guiding hand, an operator who remains hidden behind the curtain, responsible for all and as Wally’s story gradually unfolds in this magnificently detailed, beautifully rendered book illustrated by a veritable who’s who of top drawer artistic talent, it becomes apparent that the mystery at the heart of Rebirth and discovering who was, and is, responsible for all that has happened since Flashpoint is one that is going to bleed over into, and become the focal point of Rebirth. 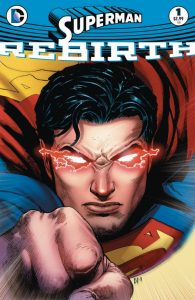 Here’s the thing though, it’s a Universe Rebirth so the incidents that occur in Johns’ story bleed into, and will eventually reach, every other book in the DC stable.  But as we’re still in the middle of its impact, there are titles that haven’t hit the shelves yet, but in this that have, Rebirth’s effects are already being felt. And to reflect this, the chronology of the books are being wound back, with most beginning again at number one.

Superman is dead, and as the entire planet finally begins to accept his demise, in Superman #1 Rebirth, the void left by his passing is felt globally and in a fable that reflects the theme of this massive crossover event, loss, escape, sacrifice and the meaning of heroism take centre stage as the Man of Steel is slowly reborn. It’s a refreshing and striking take on the Kryptonian’s legend that looks gorgeous and doesn’t underplay death or devalue mortality. The other instantly recognizable icon of the DC Universe, Batman, finds himself facing a chronological supervillain in Batman Rebirth #1, and as months and seasons turn into days, Bruce Wayne finds himself paired with another partner as his alter-ego evolves at a staggering rate and his nemesis gradually fades, only to be reborn as the seasons begin again; again mirroring the concept that lies at the heart of Rebirth. With Scott Snyder and Tom King at the helm and Mikel Janin and June Chung providing the pencils and colours, it inevitably ends up at the front of the relaunch, leading the charge. 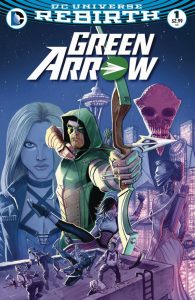 Not being a big fan of the colour green, especially as far as food is concerned, it’s always surprises the folks who know me when they find out that the book at the top of my pull list celebrates the shade so completely. However, I’m now sort of at a crossroads as Green Lanterns Rebirth #1 rather than reinvent the old status quo, abandons the old guard in favour of the new, and as Earth’s new guardians, both of whom view their roles and lives very differently, assume positions as members of the Corps and the Justice League. The plot and characterization feel a little forced and rushed, but maybe that’s just the pressure of trying to cram as much as possible into this densely packed, beautifully illustrated debut issue and given that it’s written by Geoff Johns and Sam Humphries, I’m sure those kinks and nagging issues will work themselves out over time. What is surprising though is the noir infused, stylistically dark Green Arrow Rebirth #1 in which Oliver Queen and Dinah Lance finally begin to work together (again) as they uncover the grim truth behind the disappearances of a growing number of Seattle’s homeless population. It’s a snappy, punchy start and bodes well for the future of this title, which if I’m honest, I’d never really been a fan of. Until now. 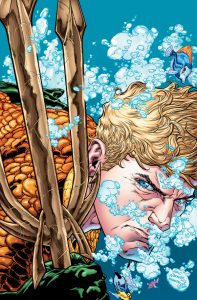 Which brings us to the third founding member of the Justice League, Diana Prince, or as she’s more commonly known Wonder Woman. Greg Rucka’s story finds its hero unsure of who she is, how she fits in the world and what parts of her past and life are true and which are a fictional construct, and in Wonder Woman Rebirth #1 she begins the long, and no doubt painful, journey to find out who she really is.  Like you, I’m tired of over-used clichés and platitudes and I hate using them, but seriously folks, Greg Rucka and his erstwhile artistic compadres have nailed it with this introspective, edgy tale about the loss of identity and the lies that everyone tells themselves about who they are so that they don’t have to face, or accept who they really are. There are few consistently reliable writers working in any genre field, but one of them happens to a chap called Dan Abnett who’s taken control of Aquaman Rebirth #1, and if this first issue is anything to go by, then it’s going to be one of the most intriguing and exciting of the relaunched titles. Told from the perspective of the Black Manta, the traditional ideas of hero and villain blur as Arthur Curry becomes the key character in tale built on vengeance and deceit. There’s an odd Shakespearian feel to this sumptuously illustrated, Alexander Dumas influenced story, that’s part Jacobean tragedy and part glorious golden age style adventure, but regardless of its constituent parts, it’s up there alongside Batman at the forefront of Rebirth. 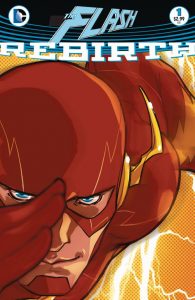 And where would be without The Flash? After all, it was a speedster who ‘s responsible for the whole thing, and in The Flash Rebirth #1, the story that powers the whole sage is expanded upon as Barry slowly starts to come to terms with the role that he played in establishing the word according to The New 52. Never one to sit on his laurels and having taken what Wally told him to heart and not able to resist a mystery, The Flash begins to unlock the puzzle of who was, and is, responsible for rearranging the world, in this grainy, abrasive story that looks and reads like a classic crime infested thriller from the halcyon days of EC Comics. 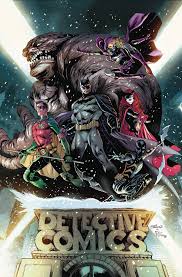 Then finally, thus far at least, there’s Action Comics #957 and Detective Comics #934, which are (and there always has to be at least one) the exception to the chronological Rebirth rule, adopting their pre New 52 numbering. In the former Lex Luthor decides to step into Superman’s shoes now that’s he’s gone, which forces someone else’s hand and the reappearance of a certain reporter deepens the conundrum of the Man of Steel’s supposed death; while the latter sees Batman upon finding out that he and a number of Gotham’s vigilantes are being spied on, enlisting the aid of Batwoman to train and prepare the crime fighters that are being watched for the inevitable showdown with their unseen adversary.  Beautifully drawn and wonderfully written, both have hit the ground running and served up a duo of tantalizing tales.

And that as they say, for now, is that. While fandom has become used to the ever shifting maelstrom of four colour turmoil, disruption and inescapable evolution, it’s also had its hopes dashed, time and time again, by innumerable crossover events failing to deliver on their initial promise. This time though, by returning to the past and leaving one foot firmly planted there, while the other explores the future, and given the opening gambits of the initial salvo of issues, it looks like DC might have finally cracked the impossible code and delivered a Universe changing event of truly cosmic proportions.  Only time will tell, but like I said, it’s looking good so far. Stay tuned to this channel… Tim Cundle