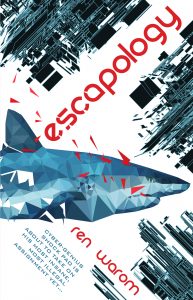 The old library in my teen hometown, Maldon, was a dingy old church filled with rickety shelves carrying half a tonne of random old books. For someone as insatiable and broke as me, it was basically tragic. You can imagine my joy then when we got a brand new library. Huge. Modern. Bright. Filled with books. I read so much I may have fractured my eyeballs. Fried my frontal lobe.

I discovered Kathe Koja there by sheer accident, squished between King books like an afterthought. The first book of hers I took home was Bad Brains, because I liked the cover. It looked weird. I wanted to try weird. My horror consumption was usually predictable as all hell.

My first impression was that this book was cool. Dark, deadly, hypnotic and somehow mean. Cruel. A woman writing this stuff? Hell yeah! I adored it. Went back to find anything else I could. I read The Cipher next and dug it hard. Found her prose scratched an itch I didn’t know I had. Reading Skin, then, was inevitable, but I thought it would be more of the same. I was wrong.

Skin hit me like a hurricane. Reached in to my guts and re-arranged me. Grabbed hold of my throat so hard I literally couldn’t breathe for weeks. I must have re-read it dozens of times before taking it back. I saved up and bought it. Read it again. Tried to breathe and couldn’t. I think that book wrecked me. I wanted to quit writing and write until my fingers bled all at once. It was like some screwed up writing re-birth, I emerged in several pieces and screaming. Changed.

How do you top that? How do you come close? How did she write that? My breath still hitches and stops when I read it now, that raw, drugging, dark as hell and dangerous petrol fire of prose. I’ve gone from envy to a sort of furious delight that it exists. That I can read it. That I found it at all considering how generally clueless I am.

It beats my heart, that book. Primes it to pump blood and pounds it black and blue. I love it hardcore, and I’d bare knuckle fight anyone who said a word against it. Is that weird? Probably. Do I care? Hell no. Finding that book was like coming home.