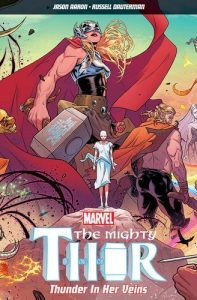 Hath the Nine Realms and Odin lost their collective marbles since last I read of the exploits of the mystical hammer wielding, Thunder Goddess, Thor? The Elves are at war, the Congress of Worlds (in whose hallowed halls Jane Foster and Volstagg sit as Senators) has become afraid of its own shadow, Freya is locked away in the darkest dungeons of Asgard, Malekith and Laufey are plotting, planning and scheming with Roxxon to conquer reality in its entirety, the Odinson is missing, Thor is branded an outlaw in her spiritual home and don’t even get me started on what Loki has been up to.  Before you even ask, yes Jane is still battling cancer, a fight that it seems she is destined to lose as every time she holds Mjolnir and becomes Thor, it negates the effects of chemotherapy, further reinforcing the idea that she, more than anyone else, is worthy of the power bestowed upon her.  She’s willing to sacrifice everything for the benefit of others and epitomises everything that Thor should be.  And in Thunder in Her Veins, she’s pushed to the limit, and beyond, of what she thought she could endure in her new role, and in the midst of the chaos and hell raining down around her, she finds a new perspective and discovers what it truly means to be Thor, and why there will always need to be a Goddess of Thunder.

Jason Aaron doesn’t believe in telling a solitary story when he can spin multiple, allied tales at the same time. Each of the seemingly disparate threads that weave themselves through the pages of this book, the impending Civil War in Asgard and its eventual outbreak,  the Elven conflict, the involvement of Roxxon in the affairs of the other realm, the machinations of the dark Council and Loki’s ongoing duplicity that feeds directly into his role in the heartbreaking finale, carries enough weight and power to pack its pages with enough firepower and fury to keep even the most demanding of fans happy,  ten times over. But together they create something wonderful. The characterisation feeds off the darkness and light that run rampant throughout the story, their juxtaposition helping to position all of the players in this Machiavellian fable of woe, betrayal and deception.  Packed with labyrinth plot twists and action, Thunder in Her Heart doesn’t forget that the best Thor stories are as much about hammer swinging mayhem and copious amounts of violence as they are the dysfunctional family dynamic of the rulers of Asgard, and as war threatens to engulf Odin’s kingdom, the eternal cuckoo in its nest strikes a blow that transforms the balance of power in Asgardia.  Aaron may tell the tales of the Gods, but it’s left up to Russell Dauterman to bring them to awe-inspiring, luscious life with his magnificently detailed artwork that makes the cold, stark embrace of the hospital ward as beautiful as the galactic vistas through which their heroine soars.  It’s Thunder time…  Tim Cundle