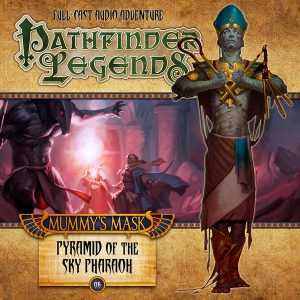 All good things must come to an end, and in Pyramid of the Sky Pharaoh the long and arduous journey undertaken by Ezren, Harsk, Valeros and Merisiel to prevent Hakotep rising from the grave to once again rule Osirion finally reaches its conclusion.  They’ve faced danger, death, betrayal and treachery at every turn, fought creatures from the lands of the living and the dead and were almost driven apart by mistrust, misunderstanding, the desire for knowledge and the corruptive touch of the dark and forbidden arts.  But at long last, they’ve reached the end of the road and come face to face with their undead nemesis and would be conqueror, Hakotep.

Just as in life, nothing in the RPG world is ever simple or straight forward; and having reached the lair of Hakoptep the adventurer’s quest becomes infinitely more complicated and perilous.  Riddles, traps, monsters, time travel, stygian sorcery and more await our plucky band of heroes as they venture ever deeper into the tomb and ever nearer to confronting Hakotep.  And the closer they get, the more they have to sacrifice, the more pain they have to endure and the more they have to suffer because every victory, no matter how small or large, always comes at a cost.  Instead of following the traditional “good versus evil” path and toeing the two dimensional rulebook that adhering to said formula would entail, Mark Wright’s drama is filled with vivid, fully formed, warts and all heroes and villains who become entangled in the intricate and thrilling plot that’s driven by the writer’s appreciation, and complete grasp and understanding of the Pathfinder world’s lore, history and legends. If he does play, I’ll bet mark Wright is one heck of Gamesmaster / Dungeon Master / Referee (delete as applicable), one who instils wonder, excitement and fear in equal measure in his players.  The cast are fantastic, inhabiting their characters completely, plunging into the sword and sorcery filled dominion of Golarion without hesitation or reservation.  Fire up your D20’s one last time and get ready to enter the Pyramid of the Sky Pharaoh… Tim Cundle