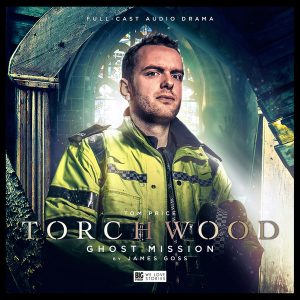 Ever since his former partner Gwen Cooper was recruited by them, Sergeant Andy Davidson has wanted nothing more than to join Torchwood.  Having spent a decade wondering why Gwen was chosen to save the world time and time again and he wasn’t, Andy is finally given a chance to prove himself when he’s approached by a Torchwood Assessor sent from the past to determine what, if any, potential he has. Having resigned himself to the fact that the biggest challenge he was going to face on the fateful morning in question was to finally talk to the subject of his affection, his day suddenly takes a most unexpected turn when he’s offered the opportunity to fulfil his long held ambition. And in true Torchwood fashion, no sooner has his examiner from the fifties turned up, than he’s thrown headlong into danger, when a mysterious truck crashes and its cargo of grocery dissolving, people eating slime begins to leak onto a busy Cardiff street.  Without thinking, and more than a little dithering, Andy springs into action and with his Torchwood shadow hot on his heels, is plunged into a whirlpool of bankrupt developers, haunted churches, alien artefacts, illegal cloning and the secretive Torchwood Committee. It might not have been the day he was expecting to have, but it’s one that he’ll definitely never forget.

Ghost Mission allows now Sergeant Andy Davidson to take centre stage and decisively emerge from the imposing shadow cast by his ex-partner Gwen Cooper. Essentially a two hander, with Andy and Norton, his Torchwood assessor, fighting the good fight throughout the story, it’s rich, vibrant dialogue and emphasis on the main characters and their interaction with each other lend it a magnetic quality, as the audience is drawn toward, and captivated by the tale of Torchwood’s everyman being  “granted” his fondest wish. The chemistry between Tom Price and Samuel Barnett is immediately apparent, buoyed by their brilliant performances and the dark, dry, self-effacing, and very Welsh sense of humour that flows effortlessly through the drama.  And it is very Welsh in places, but how could it not be with Andy in charge? His what-will-be-will-be approach to life and cheery fatalism capture the innate sense of inevitability that’s rooted in both Welsh culture and character (and yes, I’m allowed to say that, as after thirty five years of living in Cymru, I know a little bit about these things) perfectly in James Goss’ player-centric story. A story in which the ambiguity of the closing moments gives the audience pause to ponder Norton’s true motives and those of ‘Torchwood’, before ending with a finale that Andy most assuredly deserves.  Fantastic… Tim Cundle