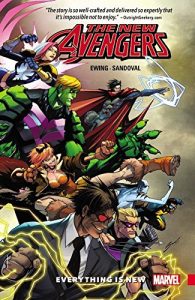 If you’re going to repurpose the Avengers for a new world (and following the events of Secret Wars, it most definitely is a new world) then why not do it on scale hitherto unknown, or witnessed by the denizens, heroes and villains of the Marvel Universe? With A.I.M. now under his control and transformed into a force for good, that’s exactly what Roberto Da Costa, the Avenger more commonly known as Sunspot, does in Everything Is New.  But that doesn’t mean that everyone is happy about Sunspot’s plans; as nations and S.H.I.E.L.D. have long memories and having fallen foul of A.I.M. in the past, no-one is rushing to put their trust, faith or belief in his “crazy” idea. And with most countries actually wanting to arrest him and sweep the idea under the super-powered carpet where it’s best forgotten, Roberto and the New Avengers are facing the biggest uphill battle of their lives to convince anyone and everyone that A.I.M. really has changed and that Everything Is New.  However there are advantages to owning your own Tracey Island packed full of ingenious vehicles, (formerly) mad scientists and superheroes, and so, with S.H.I.E.L.D. insisting that they have an “inside man” on his team, Roberto and the New Avengers set out to prove that they’re here to save the world, not destroy it.

Things get off to flying start when they’re faced by a multi-dimensional crisis that sees the inhabitants of Paris quite literally lose their heads, as their bodies are possessed by the spirits of the dead, who, with a little help from W.H.I.S.P.E.R, have crossed over from the other side.  Led by the Ultimate Universe’s Reed Richards (The Maker), W.H.I.S.P.E.R. are the organisation that every young insane scientific genius aspires to join, and as their Life Minus virus begins to spread, The Maker ups the ante and calls forth the spirit of a being from before time, from before the Universe; and things start to get really interesting and, in a good way of course, more than a little nuts. Which is sort of appropriate as Squirrel Girl is now on the team. Squirrel, nuts, get it? Jeez, you people, I give up.  After defeating Life Minus in the French capital, Hulking and Wiccan (yeah, they’re on the team too) are captured by an errant group of Space Knights seeking their king, and this “kidnapping” causes the universe to spiral out of control, leading to a future in which everything becomes the plaything of an unlikely, but oddly compelling villain. So, in grandest superhero tradition a team from the future is despatched to the past, or the present depending on your point of view, to make sure said conqueror doesn’t rip reality apart. It’s an amazingly paced, dialogue and characterisation heavy story of love, possession, suspicion and doing the right thing in the face of unsurmountable odds that ends on a high and gloriously happy note. Ewing’s tale is everything an Avengers story should be, full of action and human drama in equal measure and his manga and anime influenced artistic partner in crime, Gerardo Sandoval makes sure that every panel and every page look just as incredible as the story is. I’m beginning to think that there’s no such thing as a bad Avengers book. New Avengers… Assemble! Tim Cundle