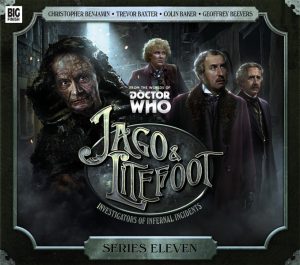 Well, bless my soul, the Victorian vigilantes and intrepid investigators of the metaphysical, extra-terrestrial and downright rum and peculiar are back to do battle with the forces of darkness in four titillating tales of terror, turmoil and trepidation set in the final, fading days of the British Empire.  When the Master appeared in the closing moments of Series Ten, providing one of the classic cliff-hangers of the ongoing serial, the course was set for the future engagements of the sometime companions of the Doctor. Their nemesis, unknown to both George and Henry as the series opens, having already arrived in London, ensures that it’s simply a matter of time until their paths cross, because in Jago and Litefoot’s world, all roads inevitably lead to the New Regency Theatre.  Or the morgue, and always, without fail, come to the attention of the duo of “daring” detectives.

The Master in place, Series Eleven begins with Jago and Son, a Wheatley-esque Hammer inspired pulp horror tale in which Henry meets his ‘heir’ and with the assistance of his colleague fights to prevent the re-emergence of the Hellfire Club and their plans to return their lord, Lucifer, to the land of the living. Following their dealings with the devil, they’re pulled into the machinations of Maurice and his automata who draws Litefoot into a world in which nothing is what it seems to be, one from which only Henry and Ellie can save him in a wonderfully strange psychedelic nightmare in which an undercurrent of Lewis Carrol style eccentricity and oddity bubbles away, softly and slowly, in the background.  Having recovered from their ordeal, they soon find that the separate cases they’ve been employed to probe in The Woman in White, as they so often seem to do, collide.  After coming to the aid of Bram Stoker (yes, that Bram Stoker) and trying to discover the origins of a mysterious mummy who passed away in the Red Tavern, they become inveigled in the affairs of the Hermetic Order of the Golden Bough, theatrical ghosts, vampires and an ancient cosmic mystery buried deep beneath the city.  It’s a witty, offbeat, engaging and intelligent adventure that in an ode to Stokers famous creation, offers a decidedly unique and intriguing explanation for the origin of literatures most celebrated nosteratu.  And then finally, having subtly manipulated events and exercised his mesmeric influence, the Master plays his hand in Masterpiece, a story carved from the finest Whovian Gothic tradition, in which the players, having been assembled, face their most deadly foe. But no series of Jago and Litefoot would be complete without a curious and cryptic epilogue that wets the audiences whistle in preparation for the next outing, and this one ends on a particularly riveting, and most unexpected, note.

Splendidly written and performed, Jago and Litefoot Series Eleven carries George and Henry’s legend, mythology and legacy on in grand and magnificent fashion. Facing danger, of the natural and preternatural varieties, at every turn and confronting the seemingly never—ending list of monstrosities that it’s become their lives work to vanquish, Jago and Litefoot are triumphant again in a series that like the finest of fine wines, gets better with age. At the risk of repeating myself, which I almost certainly am, Jago and Litefoot is one of the most consistently enjoyable serials to have emerged from the Whoniverse. With one foot in the Doctor’s realm and the other firmly planted in the pulp horror and science fiction tradition of the Victorian age, it never fails to feed your imagination with all manner of curious and fantastic delights. Bravo… Tim Cundle