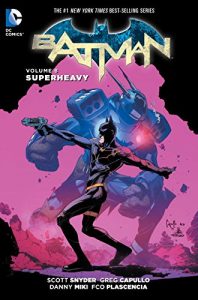 Everything turns to dust and everybody dies. Ideas though, ideas live forever. When Batman and the Joker faced each other in a final, desperate battle beneath the streets of Gotham and neither of them emerged after the world had, literally, collapsed around them; it was assumed by the city that both men had perished. While the man beneath the cowl may have “died”, the idea behind Batman lives on; and in a Gotham still in mourning for its fallen son, Powers International, the company that swallowed Wayne Enterprises, with the backing of the police department and the city, resurrect and reinvent Gotham’s dark guardian angel.  And this is his story. Superheavy is the tale of how former police commissioner Jim Gordon becomes Batman, and the story of how Bruce Wayne managed to walk away from the role that defined his life. How did Bruce escape the confines of the cowl and all that came, and comes with it? He died, and like his alter-ego was reborn, becoming a new man ready to face the trials and tribulations posed by the “new” Gotham, and from his ashes, the Batman rose, ready to bear the weight and responsibility of his role.

Batman, now an armour clad colossus and fully deputised officer of the law, faces his first super-villain in an inventive and imaginative slow-burn plot that brings the past into the present and sets the gangs of Gotham against each other and everyone else in a power fuelled rampage. It’s a no-nonsense, thrill packed story that’s crammed with beautifully illustrated and rendered action that’ll make you believe that Jim is the right man for the job vacated by Bruce. While that’s enough to warrant the price of admission in its own right, the real heart of Scott Snyder’s tale of rebirth lies in the human drama as both men, and those around them, adjust to their new lives and all of the messy, confusing, and eminently readable baggage that comes with them. Change is never easy, but the incredibly personal and at times emotive fable woven by Snyder captures all of its delicate nuances as it paints a very human picture of the old, and the new, Batman.  Capullo and Miki’s art is superb and is as detailed and sumptuous in the quiet moments as it is in the explosive, ensuring that Superheavy maintains the frantic, stygian momentum that Snyder has imbued the plot with. It’s the same Bat channel that we all know and love; it’s just a slightly different, but still hugely enjoyable Bat programme.  Batman is dead, long live Batman… Tim Cundle