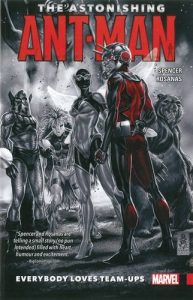 You know that old saying about bigger being better? It’s wrong. But don’t take my word for it, spend a couple of hours with Scott Lang, The Astonishing Ant-Man, and I guarantee that you start to come round to my way of thinking. Well, nearly guarantee because, you know, this isn’t an exact science. In fact, it isn’t any kind of science at all, it’s just opinion. But that blurring the lines between opinion and fact never stopped creationists from sharing their nonsense with the world, did it? While we’re still sort of the subject of science, without it there wouldn’t be an Ant-Man, as it was Marvel’s premier boffin and artificial intelligence obsessed engineer Hank Pym who originally designed, and wore, the superlative shrinking suit.  And who, in Everybody Loves Team-Ups recruits his sometime insect sized replacement to help him battle the “bad” robot Avengers who even they’ve fallen under the control of Egghead, still have a slightly disturbing creator fixation.

The one time partnership with Pym is par for the course for Ant-Man, who having become somewhat disillusioned with being a super-hero and frustrated with the lack of opportunities for an ex-convict trying to turn his life around, is busy trying to establish his own security consultancy. But that’s the problem with being a costumed crusader, once you’re in the masked vigilante circle; it never really lets you go as Scott, much to his chagrin, discovers in Everybody Loves Team-Ups. While his personal life is rapidly being flushed down the toilet and his relationship with his daughter is nearly non-existent, old adversaries and enemies just can’t leave him alone and with the help of a little application set out to crush him underfoot once and for all. Oh, and then there’s the ex-girlfriends, who are either seducing him or dragging him hook, line and sinker into a secretive scheme which isn’t going to end well for anyone. Then there’s his business partner who in-between running a retirement home for old superheroes and forcing him back into a life of crime is constantly trying to find ways to get him to pay back the money she lent him, while his employees are entering into a clandestine arrangement with some of their boss’s least favourite people. Yeah, things sure are tough for the little guy, especially when you throw in all the hero stuff on top of everything else. Astonishing Ant-Man writer Nick Spencer has woven an outstanding tale that’s as much about the car crash, train-wreck everyday lives of all its participants as it is about the goodies versus baddies superhero stuff. In Spencer’s hands, Lang has become the kind of poor, working schlub who can’t catch a break that we can all relate to, more human than superhuman, making him the kind of hero who you can really get behind and root for. The dialogue, characterisation, humour and myriad of sub-plots are first rate and make you want to grab a ticket for the Astonishing Ant-Man show and pay extra for a ring-side seat to the Scott Lang spectacular And don’t even get me started on the artwork, as Schoonover and Rosanas knock it out of the park time and time again, scoring home run after home run. Good things really do come in small packages… Tim Cundle