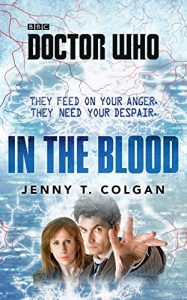 With the increasing pace of life in the digital age, we’ve almost forgotten that we are, at our core, a tribal species, one that thrives on social interaction. The further we sink into the lonely embrace of the internet and technology run rampant, the more the majority end up giving in to their own fears and insecurities, turning them outward and lashing out at anyone who seems content, happy or successful. After all, if we can’t be satisfied with our lot, why should anyone else be granted that privilege? Our anger has, as a society, become our driving force. In the Blood explores the connection between darker side of human nature and our self-imposed high-tech isolation through its tale of a pathogen spread by the web that preys, feeds on and amplifies the collective negative emotional norm that engulfs us each and every single day.

Every infection has a ground zero, a starting point, and having inadvertently discovered the underlying cause of a “sickness” that begins killing internet trolls but soon starts to spread to the wider populace, it soon becomes apparent to the Doctor and Donna that they’re the only people who can stop it before it wipes mankind from the face of the planet.  Nothing involving the Doctor is ever simple or straight forward though, and before he can say ‘Geronimo’, they’re immersed in a malevolent scheme that finds them racing from one side of the planet to the other in a near futile attempt to save humanity from itself and the “mastermind” encouraging it to edge ever closer to the abyss.  And when it strikes a little too close to home for comfort, and helped by a most unexpected and unusual ally, Donna and the Doctors’ mission becomes more frantic, more desperate and more fraught with danger as time, for once, isn’t on their side.

Making fun of the more absurd established social conventions and the ridiculous elements of modern society, Jenny Colgan’s story superlatively captures the Doctor and Donna’s often fractious , but endearing relationship and spins a gripping, exciting, well told and wonderfully written adventure. Filled with offbeat humour and the whimsical hope that one day we, as a species, will become everything that we could and should be, In the Blood is a marvellous medium with which to while away an afternoon or two. So forget the internet, shut down Facebook, turn off your computer and lose yourself in its pages…  Tim Cundle