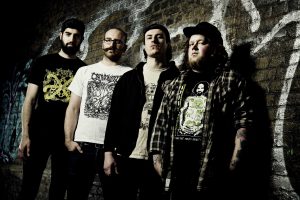 In the run-up to their appearance at Temples, MM caught up Corrupt Moral Altar for a chat about the band, the festival and the strange things that happen to touring bands. This is what their drummer Tom had to say…

MM: Let’s start at the beginning… When, where, how and why did Corrupt Moral Altar begin? Was there a specific sound and direction that you wanted the band to follow when it started, or did said musical path only present itself after you started playing together?

Tom: CMA was born in October 2012 in Southport, through a mutual love of drinking cider. Initially the idea was to write simple, hardcore influenced tunes that we could play no matter how drunk we were. Unfortunately as time went on, the writing style became a bit more involved, thus impeding the amount we can feasibly imbibe before playing a set.

MM: Corrupt Moral Altar. The band’s name would tend to suggest that it’s almost the antithesis of religion and faith, a centrepiece around which individuals broken by the modern world can congregate, lose all of their inhibitions and become who they were meant to be. Is it less complicated than that and I’m just overthinking it? Where did the band’s name come from, and is it meant to convey a set of ideas or imagery? Or did you choose it because it sounded (which it does) kinda cool?

Tom: That’s a fairly accurate interpretation, it feels like we’re being fed into the mincer and we emerge on the other side as a shapeless, meaningless mass. No wonder people want to get fucked up in this life when all we want is to feel something, to know we are real and that we exist. The name itself is actually a misquote from the book and TV series Pillars Of The Earth, we liked the sequence of words and the imagery it conveyed. The name came after recording our first demo, Needle Drugs, it is what it is and has very much taken on a life of its own.

MM: As far as CMA’s sound is concerned, I’ve heard people describe you as being everything from grindcore to metal-core to traditional Hardcore, so how would “classify” CMA? I’ve always thought as you being more like Discharge hanging out on the Lower East Side of NYC in ‘89 after a three day speedball bender… But hey, that’s just me…

Tom: Sometimes heavy, sometimes fast, sometimes slow, it’s whatever the listener takes from it really. People often refer to us as a grind band, which I personally don’t agree with. I mean, there are blastbeats here and there, and while I wouldn’t call it grind, some people obviously hear that in our music, and that’s fine with me.

MM: And talking of your sound, I can hear a lot of eighties UKHC bands like the Electro-Hippies, Extreme Noise Terror and (early) Napalm Death in there as well as a bit of Neurosis,  At The Gates and a touch of the Gothenburg sound. So, what does influence you musically and lyrically? What was thrown in the creative bender in order to create Corrupt Moral Altar?

Tom: Aside from the initial direction of ‘songs to play while drunk’, we’ve never set out to play in a particular style, so the fact that we’ve been in various bands over the years playing punk/grind/brutal death metal/hardcore/prog/rock n’ roll allows everything to culminate into how we write music today. Funnily enough, all those bands have been a big part of our musical education so it’s natural that anything which has impacted us in some way may seep into our music in one way or another. Lyrically, influences come from frustration, futility and stream of consciousness.

MM: It’s been a while since you unleashed ‘Mechanical Tides’ on an unsuspecting world, so I was wondering of there was a new record bubbling away in the CMA psyche, and if so, what you can tell us about it?

Tom: There is indeed. We started writing immediately after Mechanical Tides was completed. We decide to spend a bit more time refining these songs, MT was written and recorded within about 4 months so we tried a different approach this time round. As such, a much angrier, faster album is the result. We’re about halfway through recording vocals at the moment, and have been for some time. I’ve been pretty busy at my studio (Vagrant Recordings) so it’s just a case of fitting in CMA recording around other work that I’m doing.

MM: While we’re on the subject of ‘Mechanical Tides’, would you care to give us a song-by-song run down of the record? A sort of guide to what each song is about if you will….

Tom: Well, the album has a kind of chirality to it, the song titles may refer to a concept which doesn’t actually dictate the lyrical content, but are connected to the overall theme of each song. As a whole, Mechanical Tides is about feeling out of step and out of touch with modern life, not understanding other people or yourself, and reflecting on past mistakes and regrets. 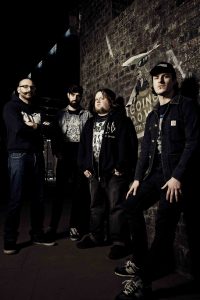 MM You’re playing Temples at the beginning of June, so how did you guys become involved in the Festival? Are you Temples virgins, or is it a regular event on the CMA calendar? What’s your personal take on Temples…?

Tom: This will be the first for all of us, actually. We’ve been in contact with Temples for a while, it just turned out this was the year for us to play, which I am personally chuffed about, as Agoraphobic Nosebleed playing this year! I think kudos is due to anyone who attempts to put on an essentially underground festival these days. It’s a massive risk, but worth it if it’s pulled off with the quality of line-up that has seemed to get better each year

MM: How has the musical “underground” changed since you became a part of it? Have those changes been positive for, or detrimental to, it’s continued evolution and growth? Why? Should the “underground” stay under the radar? Has it been ruined by mainstream exposure, or is a little bit of exposure good for all involved?

Tom: There will always be trends and fads, parts of the underground will become more popular for a while. Some bands might even ‘make it’. As something gets more popular, inevitably it will be emulated more often and the overall quality diluted. Regardless, there will always be an underground, consisting of relatively unknown bands creating honest and passionate music.

MM: The world is a weird place and when you throw touring and shows into the mix, it becomes even stranger… So, what’s the most bizarre thing that’s happened to you chaps while you been out there playing and flying the CMA flag?

Tom: A couple of things spring to mind from our tour with Sick/Tired, a topless man walking down a country lane late at night in sub-zero temperatures, with a huge axe. Bear in mind we saw no houses/lights/other roads for at least an hour each side of seeing him. I’m sure there was a perfectly reasonable explanation… Also a few days later, Reese fell in a fire at a squat in Rome. Not sure how he escaped that one unscathed.

MM: The desert island band conundrum.  If you were stranded on a desert island and could only listen to one band for the rest of your days, who would that band be and why?

Tom: Frank Zappa’s back catalogue. There’s enough variation and sheer volume of it to keep anyone from madness for a long time. Or perhaps it might speed up the descent. Either way, I wouldn’t be complaining.

MM: Apart from the previously mentioned Temples, what’s next for CMA? What does the future, hopefully, hold for you…?

Tom: We’re doing a weekender around RIIP Fest in France in July, and when our next record is out, we’ll start booking some tours!

Tom: Cheers for the interview. Buckfast for life.